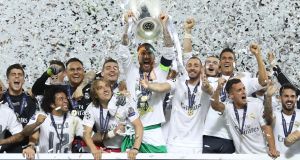 European football clubs have increased profits by €1.5 billion over the past two seasons, after sustaining years of heavy losses, as so-called financial fair play rules kicked in.

Uefa, European football’s governing body, released its annual “benchmark” report on Thursday on the financial health of the sport. The study says revenues at Europe’s clubs have risen consistently over the past two decades, while the English Premier League’s financial dominance over its continental peers has continued to grow.

Interest in the game, particularly in the top five leagues in England, Spain, Germany, Italy and France, has spurred ever-larger contracts with broadcasters and sponsors, and higher gate receipts in stadiums. But heavy spending, such as on player transfers and staff costs, had led to consistent losses at European clubs.

The data show that Europe’s clubs have begun to swing into significant profits since FFP rules, which places curbs on how much teams can spend as a proportion of income, began to be implemented in 2011. In that year, aggregate operating losses for clubs were €382 million, compared with a profit of €727 million in 2015, the latest year for which figures have been made available.

Aleksander Ceferin, Uefa president, said the FFP rules “not only steadied the ship of European finance, but also provided the framework for unprecedented growth, investment and profitability”.

The figures are skewed by the effect of the rise of the Premier League, which outstrips clubs in rival European leagues in terms of profitability, revenues, transfer spending and the value of squads.

The average annual revenues of clubs in England’s top division is €4.4 billion - €2 billion more than Germany’s Bundesliga, which is the next closest league. Premier League clubs have been boosted by a £5.1 billion domestic broadcasting deal with Sky and BT Sport for the next three seasons, an increase of £600 million compared with the previous contract.

Telefónica paid €600 million for the domestic rights to broadcast matches of all Spanish league teams last season, while Mediapro renewed its international broadcasting deal with 38 clubs in Spain in a €400 million deal for the 2016-17 season. Past analysis shows that Barcelona is set to make €150 million in broadcasting revenues this season - more than €50 million more than Atlético de Madrid, the third-highest-earning club in La Liga.

But broader disparities in broadcast and commercial revenues across Europe have allowed English teams to pay players record sums. At €2.69 billion, the average wage bill of Premier League clubs is more than double the next highest paying league, Italy’s Serie A.

Uefa also estimates that the “market value” of players in the English Premier League is the highest in Europe, worth roughly €4.4 billion. This is despite La Liga’s top clubs owning players who are widely considered the world’s best, such as FC Barcelona’s Lionel Messi and Luis Suárez, Real Madrid’s Cristiano Ronaldo and Gareth Bale and Atlético de Madrid’s Antoine Griezmann. According to Uefa, La Liga’s playing talent is worth €3.25 billion in total, while Italy’s Serie A is the next highest at €2.58 billion.