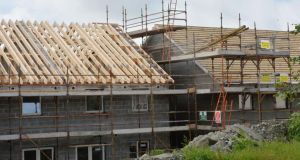 Irish residential property price data is due on Monday.

More than 50,000 people are expected to descend on the RDS in Dublin this weekend for the BT Young Scientist & Technology Exhibition which opens to the public on Thursday

The exhibition this year received the largest number of entries in the competition’s history, with 2,091 ideas and innovations submitted by more than 4,500 students.

A new feature for 2017 will see previous participants compete for the chance to exhibit their commercial ventures. The goal of the competition is to shine a light on the successful commercial enterprises born at the exhibition since its beginnings in 1965, including companies such as FenuHealth, Restored Hearing, betterexaminations.ie and Duffily Bag.

Shay Walsh, managing director of BT Ireland, said the alumni showcase is a brilliant opportunity to highlight the commercial success stories born at the exhibition.

“It’s the perfect way for 2017 entrants to glimpse the potential of their own simple ideas and the business opportunities that lie beyond the exhibition, and with a potential footfall of 50,000 people it’s also a once-in-a-lifetime opportunity for the successful companies to line up alongside some of the country’s best-known organisations and raise the visibility of their ventures.”

Past winners of the exhibition have gone on to become some of Time magazine’s most influential teenagers, establish billion-dollar software companies and achieve international success at the European Union Contest for Young Scientists.

Wells Fargo, Bank of America and JPMorgan Chase are all due to report quarterly earnings this Friday.

Wells Fargo is expected to announce its fourth-quarter results before markets open, with analysts expecting earnings per share (EPS) between 0.89-$1.04 on revenue between $21.81 billion and $22.81 billion.

Last time the company reported, Wells Fargo generated EPS of $1.03 and revenue of $22.33 billion, both which were higher than consensus estimates.

JPMorgan Chase is also reporting fourth-quarter results, with analyst expecting the stock to deliver $1.42 in EPS, representing a 7.58 per cent year-on-year increase. Revenue for the quarter is expected to be $23.87 billion.