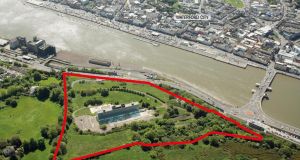 One of the most prominent redevelopment sites in Waterford city which once included a Jurys Inn hotel is to be offered for sale at a knockdown price.

The hotel was operated by the Jurys hotel group during the 1980s and 1990s and when the group was floated on the stock exchange the hotel was sold to Donegal hotelier Brian McEniff.

He closed the business in 2006 and sold on the hotel and adjoining land to a business consortium which subsequently got planning permission for a 160-bedroom hotel, leisure centre, three-storey nursing home and 107 apartments. The planning permission has another two years to run.

Part of the original six-storey hotel remains on the site in a derelict condition.