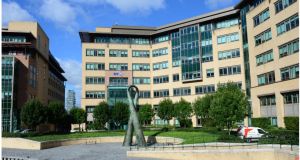 Some 59 per cent of this figure related to international companies taking space while 52 per cent of take-up was in the city centre.

The amount of available space in the market fell by 5 per cent over the first quarter. This left Dublin’s overall vacancy rate at 13.5 per cent, while the city centre rate now stands at 10.9 per cent. “But,” according to Lisney, “a third of city centre supply could be considered sub-standard space.”

Aircraft leasing companies were an important part of the picture. The sector reported three deals in the first quarter for 1,200sq m (12,917sq ft) while a large pre-let to Aercap is due to be finalised in the coming months.

Lisney reports that of the three new office schemes under construction, two are already pre-let. “This leaves just one new building under construction available – No 1 Ballsbridge – which was on hold since July 2014 but restarted recently. This site and the buildings currently under refurbishment (such as the former Bank of Ireland HQ, Hanover Reach and Hibernian House) are insufficient for the Dublin market.

With falling vacancy rates and limited supply growth, sourcing the right accommodation has become an even bigger issue than rising rents for tenants, according to Lisney.

“Those companies wishing to expand may now either have to postpone plans or settle on satellite offices outside of the CBD. We are already seeing signs of this. For example, Mason Hayes & Curran took space on Ringsend Road and Google took space in EastPoint.

Take-up this year and next may be constrained by a lack of available space for occupiers seeking relatively large amounts of accommodation in one building, according to Lisney.

As a result, rents will continue to rise in the medium term. Lisney estimates prime rental growth of 29 per cent over 2015 and 12 per cent in 2016.

“Landlords in the south suburbs will benefit from shortages of city space,” it says, “and there will be increased levels of take-up in this region. Rents have already risen here by 40.5 per cent in the last two years and this trend will continue. More developers will prepare sites and lodge planning applications in the prime areas.