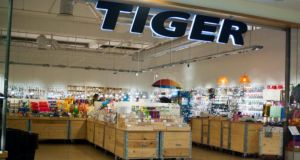 Tiger: now has 100 stores across 12 countries

The Danish variety retailer Tiger is to open between eight and 10 more stores in Ireland over the next year in addition to the nine already trading. Its most recent opening was at Patrick Street in Cork where it will be paying a rent of €120,000 per annum for a unit of 267sq m (2,879sq ft). Stephen Murray of JLL is advising Tiger which opened its first outlet in Denmark in 1995 and now has 100 stores across 12 countries.

JLL also recently handled the letting of a premises at 63-65 Mespil Road, Dublin 4, to Thunders Bakery, its eight outlet in the city.

1 Retailers accused of ‘stealing business’ from rivals by flouting restrictions
2 How long can Government afford to keep State pension age at 66?
3 In praise of Gogglebox Ireland, an essential service in all but name
4 ‘French people are pretty relaxed. They don’t pander to scaremongering or hysteria’
5 Dundrum Town Centre owner appoints new director of Ireland
6 Irish whiskey sales near milestone of 12m cases a year
7 Outgoing Irish a sitting duck for Covid
8 How to … transfer your data to a new phone
9 Nama grants Ronan four-month extension on €160m glass bottle site deal
10 Crypto credit cards: a risk to decades of fighting financial crime?
Real news has value SUBSCRIBE