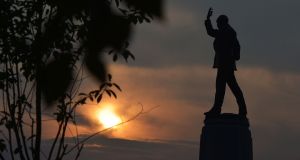 Two business figures in the North, accountant David Watters and property developer Andrew Creighton are to be invited to appear before the Stormont inquiry investigating the sale of Nama’s Northern Ireland “Project Eagle” loan portfolio.

Both Mr Watters and Mr Creighton have both vehemently denied that they were due to financially benefit from the sale of the Nama portfolio to the American investment group Cerberus for £1.2 billion.

The loyalist flag protester and blogger Jamie Bryson told the Stormont inquiry earlier this month that five people were set to share a “success fee” following the Nama sell off.

Mr Bryson alleged to the Stormont Committee for Finance and Personnel that these five were Peter Robinson, Andrew Creighton, David Watters, Frank Cushnahan and Ian Coulter.

Mr Robinson has described Mr Bryson’s allegations as unfounded and scurrilous and that he “neither received, expected to receive, sought, nor was I offered a single penny as a result of the NAMA sale”.

Mr Creighton has also stated that he had not received any payment or expected to receive any payment in relation to Project Eagle.

Meanwhile Mr Watters has also described Mr Bryson’s claims as completely false and that he had no involvement whatsoever in the sale of the Nama NI property loan portfolio to Cerberus last year.

Mr Coulter previously stated that no politicians in the North were “ever to receive any monies” and that he personally did not receive any financial benefit from the Nama sale while Frank Cushnahan has also declared that he never had any “meetings, dealings, correspondence or contact of any kind” with the American investment group Cerberus or any of its representatives.

The Stormont committee today also agreed to invite Brendan McGinn from Fortress Investment Group – another potential bidder on the Nama Northern Ireland loan portfolio – to give evidence to its inquiry.

Members of the committee are due to travel to Dublin tomorrow to meet with the Dáil’s Committee of Public Accounts.