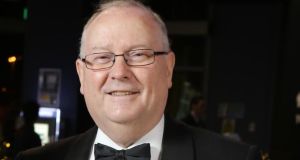 Businessman Frank Cushnahan. The committee has reportedly sent him a list of 39 questions for written reply

The chairman of a Stormont scrutiny body investigating the controversial purchase of a Nama £1.24 billion property portfolio has “firmly rejected” claims that it is biased against prominent Northern Ireland businessman Frank Cushnahan.

Mr Cushnahan has now refused to have any dealings or to give evidence to the Stormont finance committee in relation to the sale of property portfolio, which is known as Project Eagle.

Daithí McKay, the Sinn Féin chairman of the Assembly finance committee, has indicated that an effort could be made to legally compel Mr Cushnahan to give evidence. Considering that Assembly elections take place this May it seems unlikely that such legal proceedings could happen before then.

Mr McKay has also rejected a claim that the committee is seeking to prejudice an investigation by the British National Crime Agency into the purchase of Nama’s Northern Ireland property portfolio by US investment giant Cerberus.

The controversy first arose last year when independent TD Mick Wallace said that arising from the Nama sale £7 million was lodged into an Isle of Man account reportedly intended for a Northern Ireland politician or party.

It was also alleged at the Assembly committee by loyalist blogger Jamie Bryson that Mr Cushnahan was one of the intended beneficiaries of the £7 million – a charge Mr Cushnahan denied.

Shortly before Christmas Mr Cushnahan’s solicitor, Joe Rice, wrote to Mr McKay saying he would no longer be engaging with the committee on behalf of his client.

Mr Rice said that in a previous letter on December 11th last year “we mentioned our horror at various references made by you about our client and in particular your description of our client as a ‘double agent’ during the committee session on Wednesday 9 December 2014.

“The gratuitous use of this sinister expression and similar derogatory phrases has totally undermined our confidence in the ability of you (and your committee) to conduct a fair investigation,” he added.

Mr Rice said the committee appeared to have “pre-determined issues” against Mr Cushnahan “without having concluded your investigation”.

He also referred to the current investigation by the British National Crime Agency (NCA) into the Nama purchase and added, “You and your committee seem determined to undermine and prejudice the fairness of the NCA investigation involving our client and any court hearings that may ensue thereafter.”

Mr McKay said he “firmly rejected” the claims, adding that attempts to “discredit the committee” would not succeed. “The fact of the matter is that the committee has come under attack from day one. There have been a number of efforts to derail this inquiry and the committee’s work. Those efforts have failed,” he said.

Mr McKay indicated that with the election approaching the current finance committee would not complete its work into the Nama sale. His committee has also sent a list of 39 questions to Mr Cushnahan for written reply.

He said that comments made during committee questioning of witnesses was all “part of the cut and thrust” of such probing.

“I believe if the committee is unable to reach conclusions in regard to the Project Eagle sale in a number of areas, including the involvement of Mr Cushnahan and indeed others, then I believe that the new finance committee that comes in place after the election should take off where the old one left off,” he said.

“This is potentially one of the biggest political scandals that we have seen on this island. So, it is important that this work is not discontinued,” added Mr McKay.

1 Who are Ireland’s 17 billionaires?
2 Fianna Fáil may have just pressed the pause button on the property market
3 Are there annual limits on inheritances or gifts to a child?
4 My father in a nursing home wants to gift me his house
5 Pensions in the spotlight, climate clash at Davos and confusion at O’Flynn empire
6 State subsidises public sector retirees to cover gap until State pension
7 O’Flynn company ‘mistakenly’ got go-ahead for Birmingham project
8 European investor acquires Harcourt Road offices for €55m
9 German fund pays €19.6m for Dublin 4 office block
10 Mixed-use investment in Greystones town centre guiding €5.5m
Real news has value SUBSCRIBE