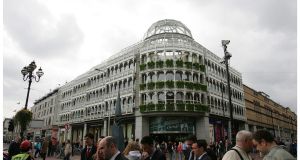 The St Stephen’s Green Centre in Dublin which is to get a €30 million facelift. Photograph: Alan Betson

Work on the remodelling and refurbishment of Dublin’s St Stephen’s Green Shopping Centre is expected to begin soon, following the sale of a minority interest in the centre to the leading real estate investor, Madison International Realty.

The New York company, noted for buying out partnerships in Grade A real estate, has acquired a 35.4 per cent stake in the shopping centre for €60 million. The investment will show a gross income return of 5 per cent.

The shares were held up to now in one of two funds managed by Irish Life, which will remain the largest co-owner, with a 37.6 per cent holding. The balance of 27 per cent is owned by businessman Pierce Molony.

John Moran of agents JLL initially sought offers in excess of €45.6 million for the available shareholding, and with five international funds chasing it Madison came out on top, at 30 per cent above the initial guide price. The timing of the sale coincided with a pick-up in investor sentiment and also with the strong pricing for prime retail assets such as the Dundrum, Ilac and The Pavilions [Swords] shopping centres in Project Jewel which also attracted wide international interest.

Moran says the St Stephen’s Green Centre has the potential to become the best shopping centre in the city. It has 90 shops over three levels with an overall floor area of 29,728sq m (320,000sq ft) and is currently producing a rental income of €6.2 million and a further €2.2 million from the adjoining 1,200 space car park.

In spite of its pivotal position in the city centre, the centre has failed to capitalise on its position at the top of Grafton Street since it first opened for business in 1988. It has been in need of investment and upgrading in recent years, but with rents generally depressed and little or no demand from the international fashion retailers, Irish Life has been reluctant to invest additional funds.

The company’s decision to bring in a new investor – as well as plans to appoint a new development director – has been seen as a positive move to kick- start the much delayed rejuvenation, which is likely to cost about €30 million. The alterations will mainly affect the ground floor, which is cluttered by no less than 20 kiosks. The new ground floor layout will have a central pedestrian aisle instead of the two existing walkways and will lead to the amalgamation and enlargement of some of the shops. The new layout is expected to create around five additional large stores.

Although planning permission was granted in recent years for a nine-screen cinema on the roof of the centre, with a seating capacity of 1,612, there have been no signs so far of the €10 million project proceeding.