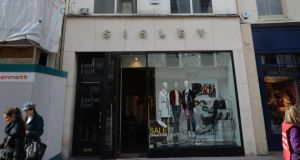 of having to pay significant financial compensation – known as a reverse premium – to attract a replacement tenant for its store near the top of Dublin’s Grafton Street.

Sisley is also planning to offload its shop in Dundrum Town Centre while sister company Benetton has indicated that it will be offering “substantial incentives” to traders willing to take over the lease of its store in Liffey Valley shopping centre.

London agent Harper Dennis Hobbs has announced on its internet site that the incentives to be offered for Grafton Street and Liffey Valley will depend on the strength of the incoming covenants. The landlords in both instances will obviously expect to secure tenants as financially secure as Sisley and Benetton.

Rent levels
The company’s decision to pull out of Grafton Street may well reopen the issue of rent levels in the city’s main shopping thoroughfare. Though many traders have had their rent cut by 50 per cent and more, some landlords have either refused to make concessions or granted only marginal reductions.

In Sisley’s case, the landlord, Irish Life, has apparently settled for an abated rent of €453,164 as against the full rent of €537,000 – a reduction of 19 per cent. On the opposite side of Grafton Street, Canada Life, which now trades here as Irish Life after taking over the company, has agreed to let a shop to Ecco Shoes for €210,000 after a long running dispute with the previous tenant (Korkys Shoes) which had been charged €445,000.

Two other institutions, Irish Property Unit Trust and Aviva, also dropped the rent on the former HMV store from €1.7 million to €865,000 in order to attract Massimo Dutti.

Unlike the Grafton Street unit where a reverse premium will obviously apply, Sisley is inviting offers for the shop in the Dundrum Town Centre, where there is a constant demand for outlets both from Irish and overseas traders.

Benetton’s London property agents said on their website that “substantial incentives are available, subject to covenant strength” in the case of the Liffey Valley shop.