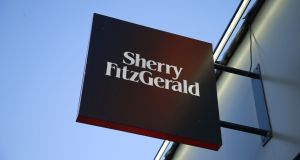 Estate agent Sherry FitzGerald says housing demand has been “remarkably robust” in the face of the pandemic.

Publishing its annual results for 2019, which showed it generated an increased turnover of €30.3 million last year, the company said it expected transactions to be down overall this year as a result of the lockdown.

“2020 has been a challenging year for everyone in Ireland, and a year of seismic change,” chief executive Steven McKenna said.

“Travel, foreign holidays, and other life-changing events have been put on hold, and instead people have begun to look more closely at their housing options, where they live and how they live,” he said.

The company said it expected the Irish mortgage market to grow to €15 billion by 2025, up from €9 billion now, with as much as €6 billion in deals arranged through mortgage brokers.

It said its objective was to command 20 per cent or €1 billion of this broker market.

The company has recently teamed up with onlineapplication.ie, the brainchild of mortgage expert Karl Deeter, in a bid to give customers greater choice and to streamline the traditionally cumbersome mortgage application process.

“Research shows that many consumers want the choice a mortgage broker can offer, and this new relationship will enable us to introduce new features to MySherryFitz in 2021, which will make the mortgage application process much easier,” Mr McKenna said.

The latest accounts for the Sherry FitzGerald Group Ireland Holdings Limited show the company’s turnover increased by 7 per cent to €30.3 million last year from €28.3 million in 2018.

The accounts show it sold 8,400 residential properties with a capital value of €3 billion, of which 2,100 were new homes.

SherryFitz had a 15 per cent share of the Irish residential market last year, in line with 2018, and employs more than 600 people across 96 offices (27 owned and 69 franchised).

Mr McKenna said the company’s strategy of investing in technology enabled its estate agents to continue to serve clients during the lockdown.

“During full lockdown earlier this year, while our branch network was physically closed and in-person viewings were suspended, we remained open for business in a safe and virtual environment through the support of MySherryFitz where we sold a thousand properties,” he said.