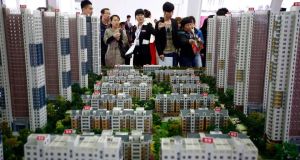 China’s real estate investment rose 16.8 percent in first three months of 2014 from a year earlier, and revenues from property sales dropped an annual 5.2 per cent, the National Bureau of Statistics said.

The slowdown in China’s real estate market was evident in the recent Q1 data, prompting a few people to ask: has China’s property bubble already burst? News that property prices in Hangzhou, the capital of prosperous Zhejiang province in the east, had dropped by 30 per cent has unnerved many investing in the market.

A recent series on China’s state-run China Central Television showed how many second- and third-tier cities are now facing problems in places like Hangzhou, Shenmu and Qinhuangdao.

“We expect oversupply to continue to weigh on the sector; sales growth was negative for a third month running in March and developers’ inventories continued to rise,” wrote Qinwei Wang and Julian Evans-Pritchard at Capital Economics.

“That said, plans announced recently to speed up railway and social housing construction should help to partially offset the downward pressure. Growth in infrastructure investment picked up last month.

While conceding that monthly property activities tend to be volatile and 2013’s base was high after a 37 per cent year-on-year surge in property sales in the first quarter of last year, she points out seasonally adjusted property activity levels have rolled off in recent months. “Developments in March are particularly disappointing – while the 7.5 per cent drop in property sales can be largely explained by last year’s high base, new property starts declined by 22 per cent year-on-year despite a sharp drop last March,” said Wang.

“Although we had expected property sales and activity to soften in pay back for the strong rebound that lasted through the second half of 2012 and much of 2013, tighter credit conditions, higher developer funding costs, and elevated inventory levels in many cities all likely further aggravated the weakness in this sector in Q1.”