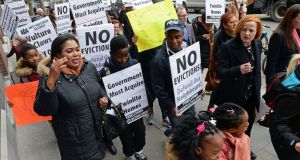 One of the companies at the centre of the evictions row in Tyrrelstown is part of a group of firms used by private equity funds to hold assets and take any enforcement action required on debts bought from the State and the banks over the past three years.

Earlier this month, tenants in the Cruise Park estate in Tyrrelstown, Dublin, were told they would have to leave or buy their homes, which the landlord, European Property Fund, is selling to pay off a debt due to Beltany Property Finance.

Beltany’s ultimate owner is the US bank Goldman Sachs, which set up the Irish company to buy and hold property loans, giving it the right to demand their repayment or to take control of the properties themselves. Neither the company nor its parent had any dealings with Tyrrelstown residents.

Between 2014 and 2015 Beltany spent more than €750 million buying property debt from Ulster Bank, the Irish Bank Resolution Corporation (IBRC) and Danske Bank, using cash borrowed from companies based in Luxembourg.

Beltany is what is known as a special purpose vehicle (SPV). In other words, it was established for a specific purpose, in this case to hold the loans bought by Goldman from the Irish banks and channel the money it makes from them back to the group. Another company, Structured Finance Management Ireland (SFM) actually set up Beltany on the US bank’s behalf, and is responsible for its administration.

Based in Mount Street, Dublin, SFM is the Irish arm of Structured Finance Management Europe, a London-headquartered outfit that provides these services in various financial centres around the world. It was recently taken over by its bigger rival, Elian, which also has a Dublin office.

SFM does not only act for Goldman Sachs. In fact, it has set up a raft of SPVs for the investors that have been cashing in on the fallout from the property crash by buying real-estate loans throughout Ireland over the past three to four years.

One that has been getting a lot of attention lately is Cerberus, the US fund that in 2014 bought Nama’s Northern Ireland loan book, Project Eagle, which is the subject of parliamentary and criminal investigations sparked by claims that business and political figures were to benefit from the €1.6 billion deal.

Cerberus has been an active buyer of boom-era debt. Over the past two years it has spent €3.2 billion purchasing debts worth a total of €18.75 billion from Nama and Ulster Bank. It recently said that it has written €4.6 billion off the total. The US fund also uses the Republic as a base to hold debts bought in Britain, Germany and Scandinavia.

SFM set up the companies that now own these debts, all of which use the “Promontoria” tag. By the end of 2014, six of the 14 Promontoria companies had filed accounts. They generated income of about €350 million and repaid €245 million in interest to their own lenders, which included fellow Cerberus subsidiaries based in the Netherlands.

A third player for which SFM provides these services is another US investor, Carval, which bought property and personal debt from IBRC, Bank of Scotland and Ulster Bank. One of the SPVs set up by SFM, Vanguard Auto Finance, purchased 10,000 car and heavy machinery loans worth €215 million from Ulster’s leasing arm, Lombard Ireland, in February 2013.

Later that year, it picked up 13,575 loans worth €48 million in general consumer debt from HSBC. These included overdrawn current accounts, charge cards and instalment loans. Carval paid for this by channelling the money through Luxembourg.

Also in February 2013, another Carval vehicle, Vanguard Property Finance, bought €325 million in property loans in Ireland and Italy from Bank of Scotland. Once again, it financed the deal through Luxembourg.

Sources linked to the investment funds that use SFM variously describe it as a “sort of a corporate trustee” or a “service provider”. At heart, it’s an administrator that looks after the vulture funds’ bureaucratic needs. It sets up the companies, does their books, files their accounts and provides non-executive directors for their boards.

Returns to the Companies Registration Office show that SFM’s managing director, Karen McCrave, and her colleague, Jonathan Hanly, are both directors of 117 companies. These include all those tied to Carval, Cerberus and Goldman. Fellow staff members Fiona de Lacy Murphy and Rachel Martin are on the boards of 124 and 100 companies respectively. A fifth employee, Ian Garvan, has 41 directorships.

All have backgrounds in financial services. McCrave worked for Bank of Ireland, among others, for 15 years, before joining SFM. Hanly held a number of roles in Royal Bank of Scotland and Ulster Bank, both of which sold debt to his current employer’s clients before he came on board in 2012.

For the most part, the SPVs play a fairly passive role. SFM has no part in such things as tax planning, which by and large involves all the investment funds channelling the money collected here offshore in such a way as to ensure that they pay just minimal amounts to the exchequer.

Carval uses agents such as Pepper and Everyday Finance to collect the repayments due on the loans. Goldman also uses Pepper, while Cerberus uses Capita. The investors themselves tend to employ few people directly, preferring to contract out the work of collecting money and to remain at arm’s length from the SPVs.

One area where the SFM companies are not passive is enforcement. As they own the debts, they can go to court, appoint receivers or have companies wound up to get repaid. Cerberus-controlled Promontoria Aran recently pursued independent TD Mick Wallace for a €2 million judgment on foot of a guarantee he had originally given to Ulster Bank against a loan to his company, M&J Wallace. Hanly was one of those who provided an affidavit.

Last year, a dispute between Beltany and Galway developer Padraic Rhatigan ended up the in High Court, but the pair ultimately settled. Beltany took four other cases between 2014 and 2015, all of which were seeking judgment against debtors.

Vanguard Auto Finance recently opened one set of proceedings and took four others last year. Vanguard Property Finance was named as a plaintiff in four cases in 2013. Many of the defendants were individuals rather than companies. None of the companies seem to favour one law firm over another, but they tend to use the better-known commercial practices.

SFM itself earns fees in return for this work. As it is classed as a small business, it only has to file abridged accounts, which contain just minimal amounts of information. However, its 2014 returns show that it received €2.5 million from those special-purpose companies where McCrave and Hanly were directors.

Figures published by some of SFM’s clients show that, in 2014, Beltany paid it €47,000, Vanguard Property Finance paid €38,000 and Vanguard Auto Finance paid €31,000. Given that the likes of Cerberus have bought yet more loans here since that time, it is likely that SFM’s fee income increased as its clients stepped up their activity.