Second phase of Dublin Landings goes on sale for €98.8m 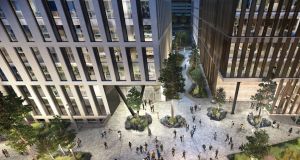 CGI of proposed No 2 Dublin Landings in the docklands

Only months after selling the first of five office buildings under construction in the Dublin docklands, Irish property company Ballymore and its Singapore partner Oxley are to launch a new marketing campaign today to enlist a buyer for the second phase of the development.

CBRE and Knight Frank are quoting €98.8 million for No 2 Dublin Landings, which has been pre-let to the global co-working operator WeWork and will show an initial return of 4.50 per cent.

German institutional investor Triuva was the highest bidder, at €164 million, for No 1 Dublin Landings, which attracted 10 bidders and will show a net initial return 3.95 per cent.

The bidders this time around are likely to come mainly from Germany, France, the Middle East and Asia. It will be no surprise if either Irish Life or Iput Property Fund also end up chasing the investment.

No 2 Dublin Landings, due for completion later this month, will be finished to the highest international standards, having achieved a shell & core LEED platinum and a BER A3 rating. The spectacular eight-storey block will have an overall floor area of more than 9,245sq m (99,513sq ft) and 23 car parking spaces.

The latest development is located at the rear of the first block, adjoining the recently completed Central Bank headquarters and the extensive PwC building.

Dublin Landings is one of the most ambitious regeneration projects undertaken in Dublin. When completed, it will extend to more than 100,000sq m (1,076,380sq ft). As well as the offices and retail and restaurant facilities, there are also plans to develop almost 300 badly needed apartments.

No 2 Dublin Landings overlooks the new Central Square and will be finished to the highest specification, including 4-pipe fan-coil air conditioning and a spectacular full height atrium with three panoramic 21-person lifts . Staff facilities such as bike storage, showers and changing rooms will be provided at basement level.

The building has been pre-let to WeWork on a 20-year lease with no break options. The initial rent, subject to final measurement, will be around €4.822 million, reflecting an average rent of €511.6 per sq m (€47.53/sq ft) on the office accommodation. The lease provides for a fixed increase at first review to €5.327 million.

WeWork is one of the world’s leading serviced office operators, providing a global network of workspaces with 220,000 members and 251,000 desks across 234 locations. It attracted a €4.4 billion investment from SoftBank in 2017 and has a reported value of $20 billion.

The Dublin Landing development will provide five separate office blocks in an exclusive urban setting. In addition to numbers 1 and 2, development of the remaining three blocks providing a further 28,700sq m (308,926sq ft) is well underway and will be available for occupation in 2019.