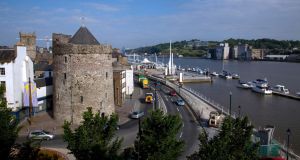 Waterford city centre has been in decline since 2005.

The Fawaz Alhokair Group is believed to have agreed purchase terms with Waterford City Council and Nama on a four-acre site at Michael Street with planning permission for a 10,219sq m (110,000sq ft) shopping centre and a 400 space car park.

The Saudi company is also reported to have agreed purchase terms on a 17 acre site with a special planning status on North Wall Quay on the opposite side of the river Suir for further retail facilities as well as offices and apartments. The plan is likely to involve the development of a new transport system linking both side of the river.

The proposed shopping centre will be located close to the two principal streets, Barronstrand Street and Broad Street, and is planned to open for business before the end of next year. The centre will be around the same size as the existing shopping centre, City Square, which is anchored by Dunnes Stores and Debenhams.

Fawaz Alhokair Group says on its website that it has expanded its business beyond Saudi Arabia and invested in retail and real estate sectors across Gulf Cooperation Council countries, reaching to the Middle East and North Africa, US and Central Asia and Caucasus. The company operates 2,100 stores across 16 countries, managing more than 1.6 millions square metres of prime real estate.

The company’s success in the Middle East stems largely from the franchise rights it holds to global apparel brands including Zara, Banana Republic, Gap, Nine West and Top Shop. The Waterford investment will be seen as a property investment with considerable potential.

Waterford city centre has been in decline since Waterford Wedgwood announced the closure of its crystal glass plant in Dungarvan in 2005.