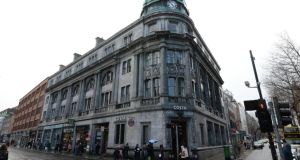 
An investment company has paid just over €10 million – €2 million above the guide price – for five shops at the junction of Dawson Street and Nassau Street in Dublin city centre.

The sale of the Morrison Chambers properties attracted a larger number of bidders than usual because of the prime location and guaranteed rental increases in the future.

Jacqueline Fitzpatrick of Jones Lang LaSalle handled the sale for the American private equity firm Lone Star which bought the shops from Nama as part of AIB’s Project Kildare. The five shops at 1 Dawson Street and 27/32 Nassau Street are currently producing a rent roll of €548,000 which is due to rise further through a stepped rental increase and a turnover top-up agreement. The shops are at street and basement levels and have a combined floor area of 1,068sq m (11,500sq ft).

The upper floors of the early 20th century Morrison Chambers are mainly used as offices and are separately owned.

Landmark hall
The shops include the landmark former banking hall now occupied by Costa Coffee which has a handsome entrance right on the corner of Dawson Street and , is paying a base rent of €100,000 as well as 15 per cent of the gross turnover after the rent has been discounted.

There is a break option in 2021 on the building which has double height ceilings and decorative cornicing.

Both KC Peaches and Costa greatly benefit from their trading positions beside the busy side entrance to Trinity College.

These food outlets also do well because of their close proximity to the bottom of Grafton Street.