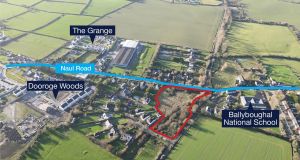 The 2.73-acre greenfield site is 27km north of Dublin city centre, at the junction of the Naul Road (R108) and the R129, and close to Ballyboughal National School and church

Savills is guiding €700,000 for a 2.73-acre greenfield site in the North Dublin village of Ballyboughal which has planning permission for a development of 17 houses, eight apartments and two retail units in addition to 45 surface car-parking spaces.

The site is located in a well-established residential area at the junction of the Naul Road (R108) and the R129. It is close to Ballyboughal National School and church as well as a shop, bar and restaurant. Both Roganstown Golf & Country Club and Hollywood Lakes Golf Club are within easy commuting distance. Ballyboughal is located about 27km north of Dublin city centre and about 9km north of Swords.

Of the 17 houses with planning approval, three will be detached, six semi-detached and eight terraced. There will also be eight apartments and two retail buildings.

Colette Mulroy of Savills said they expected a “good demand for the site” because of its planning approval in what was a highly regarded village.