Space in 30 developments due on stream this year

This is the first year Facebook will take part in Open House Dublin. The social network's Dublin headquarters will be open to the public on October 15th but this event is now fully booked 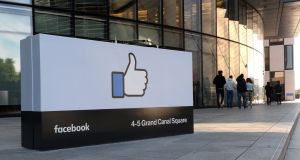 Demand for office space in Dublin is now running at its strongest level for years even before a range of banks and financial institutions decide if they should relocate here as a result of Brexit.

Facebook, AIB and the IDA are among more than 10 Dublin-based companies now looking for office accommodation in the city, and with about 167,000sq m (1.8 million square feet) of new space in 30 developments due to become available through this year it looks like they should all be accommodated.

One of the first overseas companies – a US trader engaged in financial services – planning to relocate from London to Dublin following Britain’s decision to leave the European Union has instructed Cushman & Wakefield to find suitable offices in the city of 40,000-50,000sq ft (3,716-4,645sq m).

The request is to be handled by Ronan Corbett, who specialises in tenant representation at the agency. He said this was only one of a substantial number of companies looking for office space, underlining Dublin’s “growing status as a global city”.

The company already employs more than 1,600 people at its European headquarters beside the Bord Gáis Energy Theatre in the south Dublin docks. The additional building being sought will bring the company’s overall office accommodation in the city to more than 30,647sq m (330,000 sq ft). It is also building a €200 million data centre in Clonee, Co Meath.

Facebook’s success in expanding its European operation at a rapid pace has been greatly facilitated by the availability of a huge pool of talented international staff in Dublin.

AIB is also looking for 9,290-13,935sq m (100,000-150,000sq ft) of office space in the Dublin suburbs to accommodate support staff who are based in a range of buildings around the city, notably in Hume House in Ballsbridge, which was recently acquired by Irish Life.

The new owner is expected to either refurbish the building or, more likely, demolish it and replace it with a six-, eight- and nine-storey complex more than double the size with 16,900sq m (182,000 sq ft).

The IDA is in the process of recruiting an office agency to find a new headquarters building now that its lease of Wilton Park House at Wilton Place is due to run out in 2019. The State agency pays a rent of €4.6 million for the 12,077sq m (130,000 sq ft) block but sublets a large proportion of it to five other tenants. The IDA is expected to look for 6,967-7,432sq m (75,000-80,000 sq ft) of new accommodation. Wilton Park House is set to be redeveloped by owners IPUT.

Other companies looking for office space in Dublin include the banker, BNP Paribas Ireland, currently based in the IFSC, and expected to pitch for about 2,787sq m (30,000sq ft) in a prominent location.

Fleetmatics, a fast-growing company which allows fleet operators to identify key locations visited by their drivers, is understood to be on the lookout for 3,716-4,645sq m (40,000-50,000sq ft).

The Chinese company Huawei, specialising in telecommunications equipment, and New Relic, a software analytics firm, are also in the market for broadly similar floor plates.

Zendesk, the American customer-service software company based in San Francisco, is understood to be looking for a premises of about 4,645sq m (50,000 sq ft), while Allergan, a pharmaceuticals company based at the Earlsfort Centre, and the Irish animated studio Boulder Media are each hoping to find about 3,251sq m (35,000sq ft). California-based software developer Informatica is also on the lookout for a marginally smaller office space.