Tetrarch Capital development involves change of use of Sackville House 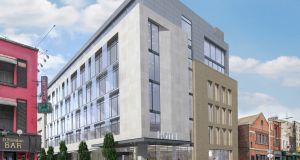 Irish property and investment group Tetrarch Capital has received planning permission from An Bord Pleanála for a 158-bedroom hotel on Sackville Place, which is situated close to O’Connell Street in the heart of Dublin.

Tetrarch originally applied for planning permission to Dublin City Council last year, which was granted by the local authority in March. This grant was then appealed to An Bord Pleanála by the nearby Wynn’s Hotel and by the heritage group An Taisce.

However, the new hotel has been given the green light by the appeals board subject to 13 conditions.

The development involves the change of use of the existing 3,281sq m of Sackville House from retail and commercial use at basement and ground floor level and office use at upper floors into a hotel.

There will also be retail/restaurant/cafe use in one unit of 86sq m at ground floor level and the addition of three storeys to make it a seven storey building in height. The development will also involve a new facade.

There will be staff bicycle parking, a “green roof”, and hard and soft landscaping on adjoining streets. An Bord Pleanála decided that the development would “not adversely impact upon the architectural heritage” of the area and was acceptable in terms of traffic, safety and convenience.

It also requires the appointment of a liaison officer to co-ordinate development with the Luas cross city works taking place in the area. In addition, Tetrarch will be required to pay an agreed “financial contribution” to the local authority prior to beginning any building works.

Located behind the former Clerys department store, the development of the “budget boutique“ hotel will involve an investment of about €16 million.

No comment was available from Tetrarch on the granting of planning permission but it is understood that the company hopes to open the hotel in mid 2018. This is one of three new hotels that Tetrarch is planning for central Dublin, comprising 750 new bedrooms and an investment of about €100 million over the next two to three years.

The company is developing plans for a 400-bedroom hotel at Townsend Street in the city, with an application for planning permission likely to be submitted before the year end.

Tetrarch is also investing €25 million in a 178-unit aparthotel on a half-acre site at Mark Street, close to Trinity College. This will offer bedroom accommodation and kitchen facilities, aimed at three- to seven-night stays for visitors to the capital.

The Dublin-based investment group last year created Tetrarch Hospitality to manage its leisure and accommodation portfolio, with Damien Gaffney appointed as managing director of this unit.