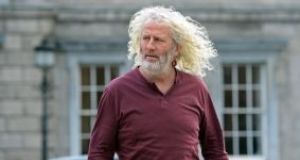 Mick Wallace: “We’re probably not going to get the whole truth until we have a proper independent commission of inquiry”

Renewed calls for the establishment of an investigation to examine the purchase of the National Assets Management Agency’s Northern Ireland property portfolio have been made after new allegations emerged about the deal late on Monday.

Frank Cushnahan, a former Nama advisor at the centre of the row over the agency’s Project Eagle’ sale was heard on a recording broadcast on BBC Northern Ireland’s Spotlight programme claiming he was meant to receive €7.7 million for facilitating the deal, which saw US equity fund Cerberus buy the property portfolio of £4.3 billion loans for just £1.3 billion in 2014.

Sinn Féin president Gerry Adams and Independent TD for Wexford Mick Wallace were among those to call for a new inquiry into the deal on Tuesday.

Mr Adams said a commission of investigation was needed into the sale, adding that the outgoing coalition had refused to recognise mounting public concern surrounding the sales process.

“Sinn Féin is again demanding an independent Commission of Investigation to examine the damning allegations of insider trading and political cronyism,” he said.

Mr Adams said he had repeatedly asked outgoing Minister for Finance Michael Noonan and Nama why they had failed to abandon the sales process when a second bidder, Pimco, made a very serious disclosures to them about fixers and fee arrangements.

“Sinn Féin does not believe the taxpayer got best value for money from the sale of Project Eagle to a US vulture fund at a huge discount,” said Mr Adams.

“It is extraordinary that Michael Noonan failed to inform the executive of these disclosures,” he added.

Independent TD Mick Wallace, who is involved in a €2million dispute with Cerberus which is linked to his Italian Quarter development in Dublin, also called for an inquiry into the sale of Nama’s Northern Ireland property portfolio.

Mr Wallace sparked controversy last year when he raised a number questions over Cerberus’s purchase of Project Eagle. Two parliamentary investigations and a criminal complaint around the deal are still ongoing. Cerberus has denied any wrongdoing.

Speaking on Newstalk on Tuesday, Mr Wallace questioned the manner in which Nama chose to dispose of its northern portfolio.

“A big problem with all the Nama sales is that they were so big that very few people could even entertain the idea of buying them and so you have to ask why were Nama so insistent on selling such big parcels that only US venture funds could possibly enter the bidding process. This policy led to a very uncompetitive process,” he said.

“We’re probably not going to get the whole truth until we have a proper independent commission of inquiry,” Mr Wallace added.

The Spotlight programme, broadcast on Monday evening, played a secret recording of Mr Cushnahan telling two others that £6 million sterling (€7.7 million) moved from Belfast law firm Tughans by its managing partner, Ian Coulter, to an Isle of Man bank account in late 2014, was destined for him for facilitating the Project Eagle deal.

The money was allegedly part of a £7.5 million fee that Tughans received for working on the successful bid by Cerberus.