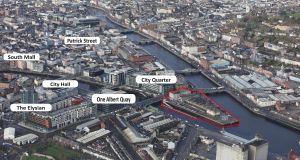 Port of Cork has put its headquarters in the centre of the southern capital up for sale at €7 million in what must be one of the best brownfield sites to come on the market for years.

The three-acre wedge- shaped site on Custom House Quay is at the confluence of the north and south channels of the river Lee. This area is part of a downriver central business district taking shape around the new One Albert Quay office development and the nearby Clarion Hotel on Lapps Quay which was bought for €35.1 million last October.

Most of the buildings on the site are listed, including Cork Custom House, which was completed in 1819 to the design of architect Abraham Hargrave and first became headquarters to Cork Harbour Commissioners in 1880. Bonded warehouses to the rear of the Custom House have been commercially occupied up to recent times but are now vacant.

The property also comes with a modern marina facility which has private access from the southern side of Custom House Quay. This could provide a tourism opportunity from visiting yachts and maritime users.

Port of Cork is selling due to its stated intention to bring the majority of its port-related activity downriver. It is committed to significant investment in its facilities at Ringaskiddy and Cobh. Last May, for example, An Bord Pleanála gave the green light for a €100 million redevelopment of the port’s harbour in Ringaskiddy which should be operational in 2018.

Peter O’Flynn of selling agents DTZ Sherry FitzGerald says that, while a future office use on a portion of the site is “certainly an option”, the majority of the existing buildings – including the bonded warehouses – would be suited to leisure and cultural occupancy.

“Think of something like CHQ and the Guinness Storehouse in Dublin city which combine a visitor and cultural centre with commercial elements such as pubs, restaurants and other commercial occupiers,” said Mr O’Flynn. “There is a potential for further development on various portions of the site and certainly towards the southeast of the site where a former warehouse premises was situated.”

Plans were unveiled in 2014 for the Custom House and bonded warehouse buildings to be converted into a €15 million National Diaspora Centre. The bid was backed by dance star Michael Flatley but was axed in 2015 due to a lack of funding by the State.