Aspen Pharma has opened an office at George’s Quay Plaza 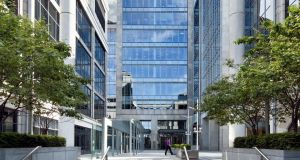 The global pharmaceutical company Aspen Pharma, which recently announced an expansion of its operation at Citywest Business Park, has also opened an office at George’s Quay Plaza on George’s Quay in Dublin 2. The company is to pay a rent of close to €430 per sq m (€40 per sq ft) for 660sq m (7,100 sq ft) of newly refurbished space recently acquired as part of the full building by Green Reit. The office was previously occupied by UBS.

Knight Frank acted for the new tenant while JLL advised the landlord.

1 Should my mam wait for house prices to drop before buying?
2 Two prominent business leaders in planning row with neighbour
3 Cheers: Conor McGregor's whiskey races up the sales chart
4 ‘I’m so lucky to be in the Caribbean – a million miles from Derry Girls’
5 Coronavirus: Big majority ‘uncomfortable’ returning to everyday activities
6 Chris Johns: Past is another country when it comes to our post-pandemic future
7 Hard-hit SMEs get ‘paltry’ €11m worth of loans under State scheme
8 Citigroup warns that markets are out of step with reality
9 Small businesses focus on training in traditional skills as Covid-19 crisis bites
10 Why we’re about to learn if we are really in the A-team
Real news has value SUBSCRIBE