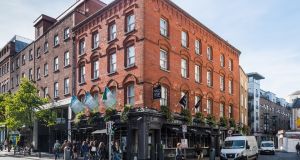 The highly profitable Paramount Hotel and Turks Head in Dublin’s Temple Bar area is to be sold as a going concern following the resolution of a dispute between owner David Cullen and Nama.

Nama originally secured a summary judgment of €29 million against Cullen after claiming that he transferred more than 40 properties including the hotel and bar to his wife Mary to place them beyond the reach of the Bank of Ireland. The issue was eventually resolved.

Paul Collins of CBRE is quoting in excess of €15 million for the well-located hotel and bar on Parliament Street which has 66 bedrooms and a thriving bar and restaurant business.

The hotel is based in 10 interconnecting four-, five- and six-storey-over-basement buildings fronting on to Parliament Street with potential to develop considerably more bedrooms subject to planning permission. Dublin city centre is experiencing a chronic shortage of hotel bedrooms, and this year was the top European city for rental growth. A similar rating is expected in 2016.

The three-star hotel has an overall floor area of 3,800sq m (40,902sq ft) including two floors used as a bar, restaurant and music venue.

Collins says the successful bidder will have the choice to continue trading under the already well-established and independent Paramount Hotel name or as an international hotel brand. There were any number of international hotel chains eager to establish a flagship presence in the lucrative Dublin city centre market.

Rio Tinto chairman to stand down amid outcry over cave blasts 15:32
Google promises not to use alternatives to third party cookies 15:15
Car-maker Stellantis sees rebound in 2021 14:42
Ryanair hopes to fly 70% of 2019 summer traffic in peak season 15:48
Dublin Bus to examine developing its prime property sites 13:36