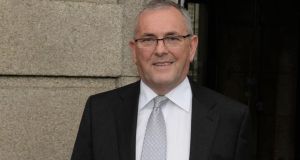 The Dáil’s Public Accounts Committee (PAC) plans to investigate claims that almost €10 million in an offshore account was intended to pay figures associated with the National Asset Management Agency sale of its Northern Ireland loans.

State agency Nama sold €5.7 billion worth of property loans in Northern Ireland for €1.6 billion – a 72 per cent discount – to US investment fund Cerberus following an auction dubbed Project Eagle in 2014.

Last week, Independent TD Mick Wallace claimed €9.8 million discovered in an Isle of Man account during an audit of Belfast law firm Tughans, which was involved in Project Eagle, was destined for a Northern Ireland politician or party.

“We are going to contact Nama asking them to come before PAC to clarify the details around that deal and the processes and procedures they went through,” Mr McGuinness said.

“It’s also important Mick Wallace would make available to us any paperwork he has so we can be more specific in our questioning of Nama. Indeed if he wants to come before us himself and put the information before us, he might appear as a witness.” Mr Wallace has said he intends to make public further information in relation to the controversy when he is “100 per cent confident” of the facts.

Nama said in a statement yesterday the issue had nothing to do with it or the competitive process it had conducted to sell the Northern Ireland loans. “Attempts to conflate Nama’s process with an internal Tughans issue are entirely wrong,” the agency said.

The PAC’s move came after Nama confirmed that another US bidder for the assets, Pimco, dropped out of the auction in March 2014 after telling the agency it had agreed to pay fees to Tughans and a former member of Nama’s Northern Ireland advisory committee, understood to be Frank Cushnahan.

He had left the advisory committee the previous November. He used an office in Tughans’ Belfast headquarters and referred business to the solicitors’ firm from time to time, but did not work for it.

Pimco had agreed to pay both him and Tughans through its US lawyer, Brown Rudnick. When Nama heard of the deal, its board decided that if the bidder did not withdraw from the auction it would be forced out. The US fund dropped out on March 13th, 2014.

Nama said its Northern Ireland advisory committee had nothing to do with Project Eagle and the sale was handled exclusively by its board in Dublin. “Cerberus gave Nama written confirmation and have confirmed again that no fees were paid to any party that ever had a relationship with Nama,” the agency said.

Tughans confirmed last week that its former managing partner, Ian Coulter, left earlier this year in a row over the cash diverted to the Isle of Man. The solicitors’ firm said it has since recovered the money.

Meanwhile, another former member of Nama’s Northern Ireland advisory board, Brian Rowntree, has said Mr Wallace’s revelations in Dáil had come as a complete shock to him. He said that the agency never updated the committee on the Project Eagle sale.