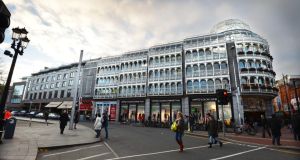 Dublin’s Stephen’s Green shopping centre is about to undergo a change of ownership and a shake-up.

Majority owner Irish Life, with a 73 per cent stake in the centre is planning to sell 35.4 per cent of its interests in the expectation that this will trigger a series of changes, including a new layout to accommodate five large new fashion stores and a nine-screen cinema on the roof of the centre.

Irish Life is understood to have instructed its commercial property adviser, Max Reilly of JLL, to look for €45.6 million for the 35.4 per cent shareholding. The investment is expected to yield an income return of about €3 million per annum, including revenue from the adjoining car park.

The remaining 27 per cent interest is held by businessman and property developer Pierce Molony. If he decides to buy in the newly available holding it would give him overall control.

Incidentally, Irish Life also initiated a sale of a 20 per cent stake in the centre in 2012 and although a buyer emerged over the €20 million asking price, the sale was not proceeded with.

Although probably the best located of any shopping centre in Dublin, the Stephen’s Green centre has failed over the years to capitalise on its prime position at the top of Grafton Street.

It has been in obvious need of investment and upgrading in recent years, but with rents in the centre generally depressed and little or no demand evident for retail space from international fashion retailers, Irish Life has hesitated up to now to plough additional funds into the centre.

This week’s off-market campaign to sell a significant shareholding in the controlling company will be seen as a positive move by Irish Life to kick-start the much-delayed rejuvenation. Once a suitable investor emerges, the newly structured company is expected to change the ground floor layout to accommodate up to five large new stores.

Already there is a string of overseas fashion traders waiting to find a suitable premises on Grafton Street.

The new ground-floor layout will include a central pedestrian aisle instead of the two existing walkways and the amalgamation and enlargement of many of the shops to give traders spacious outlets ranging from 300-400sq m (3,300- 4,305sq ft)

The reconfiguration is also expected to be of considerable benefit to a range of shops on the first floor, where TK Maxx is the biggest crowd puller.

The current owners of the centre have already secured planning permission to develop a €10 million, nine-screen cinema on the roof of the centre, with a seating capacity of 1,612. It will be the only cinema in the south inner city.

The opening of the cinema was to have coincided with a remodelling of the second floor to accommodate a wide range of restaurants and coffee outlets.