Almost 128 acres of development land close to Dublin on market for €44.75m 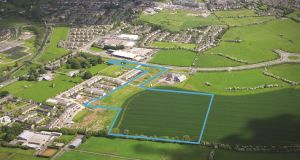 The Naas lands, which are guiding €7.5 million, are on the Southern Ring Road and extend to 15.8 acres 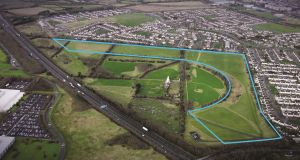 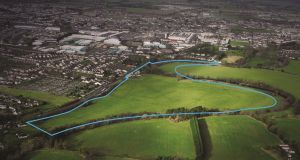 This is a so-called consensual sale – with the agreement of Nama – of assets acquired by David Daly’s Albany Group.

Daly is one of the most respected developers in the industry, having built some 4,000 homes in Dublin and Kildare over the past 15 years. While not in the “top tier” of developers whose property loans moved to Nama, he is still a significant name on the books of the State agency.

The highlight of the sale is a 38.5-acre site in Leixlip, Co Kildare which is guiding €23 million. This works out at about €600,000 per acre, slightly less than half the level it made when bought in 2004.

Located on the Celbridge Road on the outskirts of the town, which is home to the massive Intel facility that employs 4,500, the site previously had full planning permission for 451 residential units but this has since lapsed.

Two other Kildare sites, in Naas and Newbridge, will also interest developers. The Naas lands, guiding €7.5 million, are on the Southern Ring Road and extend to 15.8 acres. They are zoned for residential development under the Naas Local Area Plan 2011-2017.

The 50.8 acres for sale in Newbridge were acquired for a mouthwatering €58 million in 2006 and are now quoting €6 million – a drop of 90 per cent. They are located on the banks of the river Liffey a short walk from the town centre. About 26 acres are zoned residential but these have no planning history.

Two sites in Swords are also included in the sale. Both are situated off Kettles Lane and are referred to as Drinan-2 and Drinan-4.

The former, with a guide of €5.5 million and nearly 12 acres in size, is a ready-to- go site with permission for 153 houses and 24 apartments, while the latter, at €1.25 million and extending to 2.5 acres, had permission for 62 homes until this expired last month.

The last site on offer, at €1.5 million, is adjacent to Airside Business Park in Swords and extends to 8.05 acres. Its commercial zoning is objective HT (high technology) within the Fingal County Development Plan.

The Kildare assets will probably command very good interest as developers see these locations as areas where house price growth may outpace the capital in the next few years. Priced out of the capital, many prospective homeowners are looking to buy in commuter towns due to, among other factors, affordability issues following the introduction of new mortgage lending rules by the Central Bank in 2014.

John Swarbrigg of selling agent Savills said the sale was sure to attract interest from those looking to capitalise on Ireland’s housing shortage and seeking to amass a significant development pipeline over the next number of years.

“Each asset is being offered for sale separately in recognition of the challenge that most developers face from a funding point of view,” he said.

REA Coonan is joint selling agents on the sale of the three assets in Kildare.