Microsoft office in Leopardstown on sale for €22m 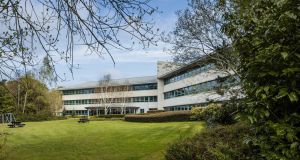 The Microsoft block in the South County Business Park has 283 parking spaces and a site area of 2.4 hectares 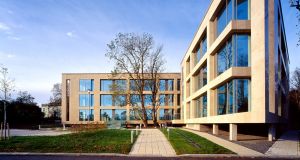 HWBC is quoting rents of €296 per sq m (€27.50 per sq ft) for the vacant Pelham House, also in South County Business Park 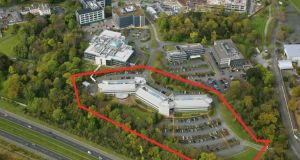 South County Business Park, where the Microsoft building is located, is one of Dublin’s premier business hubs

Green Property is to sell a 20-year-old office building in Leopardstown, Dublin 18, with scope to substantially increase the size of the development.

Colliers International is inviting offers of more than €22 million for the 8,111sq m (87,305sq ft) block occupied by Microsoft in South County Business Park which will give an immediate return of over 8.5 per cent.

Colliers says the new owner will have the option to extend the complex or develop a standalone building with additional floor area of more than 20,000sq m (215,276sq ft).

The existing block has 283 parking spaces and a site area of 2.4 hectares. The Sandyford Urban Framework Plan provides for a plot ratio of 1:1.5 to facilitate additional office-based employment in the park which is managed by IDA Ireland. The low-density, heavily landscaped park is one of Dublin’s premier business hubs with easy access to the M50, N11 and the Luas Green Line.

Microsoft is currently paying rent of €1.97 million but has various break options in the lease, which runs until January 2020. These options allow it to relocate to a new headquarters building under construction in the same business park. Microsoft also developed the existing building and sold it to Green under a sale and leaseback arrangement. The rent roll equates to a rate of €209 per sq m (€19.50 per sq ft) and €950 per parking space.

Nick Coveney of Colliers, who is handling the sale, said that with a short-term income showing a strong initial yield this was a great opportunity to acquire quality office space with significant potential for increasing the density.

Green’s decision to offload the investment comes after it decided to sell Blanchardstown Shopping Centre to Blackstone for about €950 million.

Green may also sell other properties in its portfolio including a number of buildings in Fonthill Business Park in west Dublin and the Killarney Outlet Centre now that it has switched its attention to the strongly performing Green Reit.

That company is developing a €30 million five-storey over- double basement office and retail building on Dawson Street. It is also adding 2,787sq m (30,000sq ft) of office space to four listed buildings on Molesworth Street.

The South County Business Park adjoins Central Park which is controlled by Green Reit and is fully occupied by major national and international corporations including Vodafone, SalesForce, Mastercard, Bank of America, Merrill Lynch and Tullow Oil.