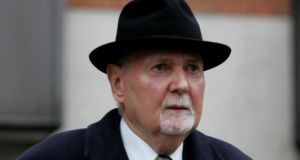 Former Irish Nationwide chief executive Michael Fingleton. At the High Court, Ms Justice Marie Baker, said Mr Fingleton had not identified anything in the terms and conditions of the loan that he might rely on in a defence. Photograph: Cyril Byrne

Former Irish Nationwide Building Society chief executive Michael Fingleton has failed to prevent a bank getting a judgment against him for €5.74 million.

At the High Court, Ms Justice Marie Baker ruled Mr Fingleton had no arguable defence to AIB’s application, which arose out of a €4.6 million loan.

The money was advanced to him and former Fianna Fáil senator Francis O’Brien in 2006 to buy nearly 16 acres of zoned land in Monaghan.

Judgment had already been entered against Mr O’Brien (71), who in November 2013 was given a three-year jail term, with the final year suspended, after he pleaded guilty to attempting to extort €100,000 from a Department of Agriculture vet.

Mr Fingleton contested AIB’s application for judgment claiming he had a defence which should allow his case go to full hearing.

He claimed he had not been involved in negotiations leading up to the loan. He was unaware of all its terms and conditions and this was particularly relevant for the purposes of calculation of interest on the loan.

He also claimed AIB had public-law obligations to afford him fair procedures.  The demand for repayment was not properly made as the bank had refused to consider submissions he had sought to make, he said.

Mr Fingleton also asserted he was entitled to set-off for his debt arising from the fact he claims to have a 25 per cent interest in lands owed by developer Gerry Gannon, with whom he (Fingleton) has a relationship and some of whose land is held as security by AIB.

Ms Justice Baker said Mr Fingleton had not identified anything in the terms and conditions of the loan that he might rely on in a defence.

He had not asserted that he did not agree to pay interest on the loan.  He was chief executive of a major Irish financial institution at the time he got the loan and “it cannot be a matter of insignificance” that he well understood his annual statements of account and the actual rate of interest that applied.

This was not a case where he seriously contended he did not read or understand the letter of loan sanction, she said.  He accepted he signed the banking documentation which incorporated the general terms and conditions of commercial lending, she said.

Only part of the 2006 consumer-protection code was applicable to his loan. He had identified no breach of the code which would be actionable even if it were to be shown the code had become incorporated into his contract with the bank.

The height of his argument was that the bank had failed to furnish him with details of charges applicable to his loan and, as those details had been incorporated into the signed loan documentation, she was of the view AIB had shown sufficient compliance with its obligations under the code.

On the issue of whether he had been afforded fair procedures, the judge said that while the State is the majority shareholder in AIB, its powers and functions as a bank are not public powers derived under statute.

There is no public-law type obligation on AIB, as there is with the National Asset Management Agency, which rendered its functions under a private contract amenable to public law remedies and fair procedure obligations, she said.