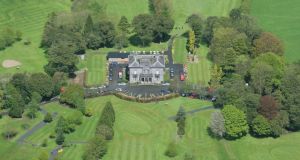 A Co Kildare golf course, reputed to have had a value of between €3.5 million and €4 million before the property crash, is being offered for sale from today at about €800,000.

The 18-hole Knockanally House and Golf Course, located between Kilcock and Donadea, is to be marketed by James Meagher of agent HT Meagher O’Reilly, who was appointed selling agent by receiver Tom Kavanagh of Kavanaghfennell.

In addition to the 120-acre golf course, the property also includes an impressive 19th-century Palladian mansion which is used as a clubhouse, a professional golf shop, five houses and a gate lodge.

The Knockanally golf course was developed by businessman Noel Lyons and opened for play as far back as 1985. It has more than 300 members who each pay annual subscriptions of €810. The members have the use of the facilities until the end of this year, according to Meagher.

While most of the members reside in Co Kildare, the course has continually attracted a considerable number of Dublin golfers over the years because of its convenient location within 6.5km from Exit 9 on the M4 motorway. Dublin is within a 40-minute drive of the golf course.

However, with no fewer than 20 golf clubs in Co Kildare, Knockanally has its work cut out to retain the support of Dublin-based golfers who are constantly being bombarded with offers from competing clubs.

The Knockanally grounds have matured quite considerably over the past two decades and the course is particularly noted for a number of extremely challenging holes. The first hole has been described by golfer Christy O’Connor as “the most difficult opening hole in golf” with out-of-bounds on the right and protection by water on the left of the green.

Meagher says that while the well-maintained golf course provides an excellent investment opportunity at a relatively low cost, a new owner might opt to use the extensive lands for agriculture or horse breeding and to convert the main house into a stylish family home.

Farming families
Knockanally House, a two-storey over basement house with 734sq m (7,904sq ft) of floor space, was the centrepiece of a an extensive estate when it was built in 1843 by William Coates whose family had mining interests in Africa.

The estate was acquired by the Irish Land Commission in 1942 and subsequently divided among a number of Irish farming families in exchange for land in other parts of Ireland.

The balance of the land and Knockanally House were later bought by a Captain Sheppard. He farmed the land and, in turn, sold it to the Maharani of Baroda, a polo enthusiast who spent his time between a home in Monte Carlo and his Co Kildare stud.