Centre seeks permission for 2,500 capacity skating arena and up to 60 new shops 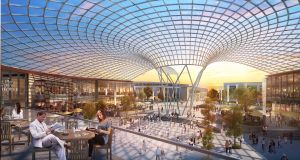 Plans for Liffey Valley shopping centre in west Dublin include an ice skating arena and up to 60 new shops, as well as the development of a major plaza under a glazed canopy.

The owners of Liffey Valley shopping centre in west Dublin have submitted a planning application for a major extension of the complex to include an ice skating arena and up to 60 new shops.

The application, devised by the centre’s manager and co-owner, Hines Ireland, also seeks permission for 1,800 car parking spaces, as well as the development of a major plaza under a glazed canopy.

The ice skating arena will be of “Olympic” standard, according to Hines, and will have capacity for 2,500 spectators and be capable of hosting ice-skating competitions, ice hockey matches and live entertainment performances.

The level of investment in the proposed extension was not revealed, but it is understood to be in excess of the €28 million spent on an extension at the west end of the centre that is currently being built, due for completion later this year.

The latest extension application includes new retail space of about 22,000 sq metres, with the potential for a new anchor tenant-type store as well as a large number of new smaller shops and food outlets.

“We are submitting the application now as a strategic forward planning initiative aimed at the sustainable development of Liffey Valley in line with future market needs,” said Brian Moran, senior managing director of Hines Ireland.

The company’s research suggests that if all planned extensions in west Dublin shopping centres were completed, it would increase the available retail space by 12 per cent in the next five years.

“Customer spend and population growth will outstrip this, so we are making this application now as economic growth accelerates to avoid the kind of lack of supply we are currently seeing in office and residential markets.”

Karen O’Sullivan, the president of the Ice Skating Association of Ireland, said the proposed new arena would be “the permanent home” of the sport in Ireland and would help develop Irish skaters as competitors on the international stage.

Hines, as the centre’s manager, submitted the application of behalf of itself and the centre’s co-owners, Grosvenor Group and a HSBC fund.