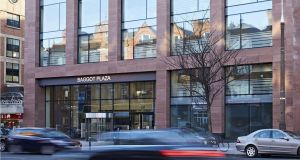 Bank of Ireland has a 25-year lease on the development.

Global real estate investment company Kennedy Wilson has completed the sale of one of its key Irish properties, Baggot Plaza in Dublin’s city centre, for $165.4 million (€141 million) to a German property investor.

Deka Immobilien, the specialist real estate investments arm of the Deka Group, has acquired the 129,700sq ft building on Upper Baggot Street, with the sale reflecting a net initial yield of 4 per cent.

Kennedy Wilson said the proceeds of the deal will be “ recycled into new opportunities”, including European acquisitions and developments as part of its investment management platforms.

Baggot Plaza was originally a 1970s building of some 90,000sq ft before being acquired by Kennedy Wilson as part of the Project Opera non-performing loan portfolio in 2013. It subsequently redeveloped and extended the site, and in May 2015, the Bank of Ireland signed a 25-year lease agreement generating a stabilised yield on cost of 8.6 per cent.

“We saw the market timing potential of a comprehensive refurbishment versus a knock down and rebuild strategy, and delivered a significant, long-term lease to a credit worthy occupier,” she said.