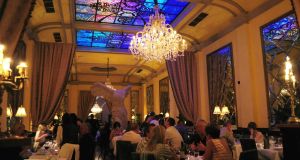 La Stampa restaurant on Dawson Street in Dublin: former operator Louis Murray told the Commercial Court that AIB’s appointment of a receiver in October 2014 significantly interfered with the running of the business. Photograph: Cyril Byrne

Allied Irish Banks advertised a Dublin city centre property which housed the La Stampa restaurant and a bar and hotel at up to €7.5 million less than their value, it has been claimed at the Commercial Court.

Louis Murray (71), a director of Bailieboro Spring Water Ltd, now in receivership, and former operator of La Stampa, Samsara Bar and the Dawson Hotel, in Dawson Street, says they are worth at least €20 million and up to €22.5 million but AIB put them up for sale with a guide price of just €15 million.

Mr Murray, of Killiney Hill Road, Dublin, and his company, provided security on the property in 2005 over borrowings from AIB.

He says the the business performed well but suffered in the economic downturn and, due to ill health, he had to withdraw from involvement from 2011 after which his sons-in-law represented him.

Mr Murray and the company have brought proceedings seeking declarations including that they had an enforceable agreement in April 2015 to refinance or discharge his indebtedness of around €19.5 million to the bank.

He also seeks a declaration that the bank, and receiver Declan McDonald, failed to act reasonably or were in breach of duty in selling the property at an alleged undervalue significantly less than the best price.

The case was admitted by Mr Justice Brian McGovern to the Commercial Court on Monday on consent of both sides.

Despite this, AIB appointed a receiver in October 2014 which significantly interfered with the running of the business, he said. He set about seeking investors and entered into talks with Olympia Investments who agreed to provide €21.5 million, including €19.8 million to settle his debt with AIB.

Despite these proposals, AIB advertised the property for sale last May with a guide price of €15 million, he said.

Mr Murray said he did not wish to await what the bank and AIB “might do” and was anxious the court deals with the case expeditiously or through the non-court dispute resolution procedure.