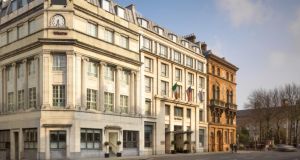 Irish Life has acquired the freehold interests in the five-star Westin Hotel and adjoining AIB bank branch on Dublin’s Westmoreland Street for an amount believed to be close to €11 million.

The sale comes more than eight months after US billionaire John Malone bought the hotel and bank premises for €65 million.

The 800-year ground lease, dating from 2001, were originally put in place by AIB and provide for a current rent of €554,876 per annum. As the head lessee, Mr Malone’s company, College Green Hotel Ltd, is liable for the ground rent, which will be subject to upwards only reviews every five years.

Sarah Dillon of DTZ Sherry FitzGerald, who handled the sale, said most of the inquiries had come from investors who specialised in ground leases.

“Ground leases offer the potential for robust and predictable income streams over the long-term,” she said, “and are somewhat unique to the Irish/ UK market.”

Irish Life’s decision to pitch for the freehold interest could have been expected because of the exceptionally long income stream available, the initial yield of about 5 per cent, and the frequency of rent reviews. Leases of 800 years are particularly rare in the Irish market.

David Eggers of Irish Life Investment Managers confirmed that it was “an extremely rare opportunity” to acquire a freehold ground rent investment in Dublin.

“The acquisition is essentially a quasi-long dated bond paying with a significantly higher annual yield [to other bond alternatives], secured against a superior property interest. Irish Life is interested in acquiring other such interests.”

The Westin, one of four Irish hotels bought by Mr Malone for around €150 million, is now run by John Lally’s Lalco Hotel Group under a franchise agreement with Westin Hotels & Resorts.

Lalco has just secured planning permission to add a further nine bedrooms, three of which will be located in the former manager’s office suite and another in a sales room. The main restaurant, closed for several years, is to be reopened before t he end of the year.

Lalco has also secured planning approval to provide an additional 23 bedrooms in addition to the 198 already available at the Trinity Capital Hotel on Pearse Street. The hotel is also to get a rooftop bar.

Lalco is also in discussions with the adjoining Great Baptist Church to add a further 44 bedrooms at a later stage.