Hotel was previously owned by Bill Cullen and Jackie Lavin 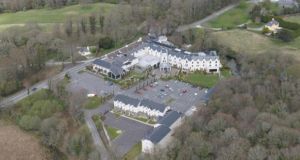 The five-star Muckross Hotel and Spa, which dates from 1795, has 68 bedrooms and 10 self-catering suites.

The five-star hotel, which dates from 1795, has 68 bedrooms and 10 self-catering suites. It was previously owned by businessman Bill Cullen and his partner Jackie Lavin.

The hotel has won a range of awards over the past few years including the TripAdvisor Top 15 Luxury Hotel in Ireland; World Luxury Spa Award for Cloisters Spa; Best Gastro Pub in Munster and the AA Rosette for Yew Tree Restaurant. It was also named the Munster Wedding Venue of the year in 2012. It can seat up to 250 guests at a wedding reception.

“Muckross Park Hotel is already a very strong brand both nationally and internationally, and is ideally located in Ireland’s busiest tourist destination outside of Dublin. Our strategy is to increase visitor numbers to the hotel and to improve its profitability. We are delighted to open a new chapter in the hotel’s history and predict a bright future that introduces and welcomes many new customers to the unforgettable Muckross experience,” said iNua Hospitality chief executive Noel Creedon.

INua has been busy adding to its property portfolio over the last 18 months, having also acquired the Radisson BLU hotels in Little Island, Cork and Limerick for €9 million and €3.5 million respectively.

“Booking pace is strong in both of our Radisson BLU hotels and we expect a similar story with Muckross Park Hotel. Momentum is good and economic activity is improving, which, when coupled with no new supply coming on stream, should drive further growth going forward,” said Mr Creedon.