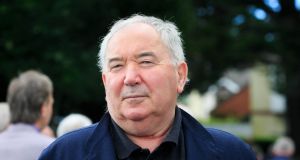 Harry Crosbie: The judge urged the parties to “engage in an effective manner” over the dispute. Photograph: Collins

A company of businessman Harry Crosbie can commence work on two kiosks selling refreshments and flowers/gifts at the Grand Canal Harbour development in Dublin, a High Court judge said.

Mr Justice Tony O’Connor said he was prepared to make an order which will enable Mr Crosbie’s family company, Fastwell Ltd, to carry out work on the kiosks in accordance with planning permission.

The judge was giving a decision in a row over the terms of a lease, affecting the kiosks, between Fastwell and OCL Capital plc, owners of the property which includes a basement car parking area leased to Q-Park Ireland.

The judge said he would also make a declaration that an agreement exists between the two companies but that it does not include a clause which relates to part of the basement car park and which is also included in the planning permission.

He dismissed an application by Fastwell for an order for rectification of the lease to reflect Fastwell’s claim in relation to the basement.

He found OCL did not agree to include any part of the basement in an agreement for the lease and Fastwell did not produce any map or plan to identify the basement area as being part of it.

He further dismissed Fastwell’s claim for damages for breach of contract.

The judge said he would hear further submissions from the parties later this month in relation to the precise orders to be made and on costs.

However, he urged the parties to “engage in an effective manner” over this dispute because the costs of the litigation would far outweigh the value of the kiosk development.

In his judgment, he said the true cause of the dispute was the “breakdown of trust between Harry Crosbie and the defendant”.