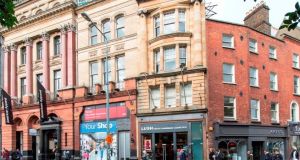 The bottom section of Dublin’s Grafton Street is to get a shot in the arm with the letting of the former Spar shop to the fast growing GlenAran company which sells a wide range of Irish jewellery, crystal, china and clothing including knitwear.

The building, one door from the end of the Grafton Street and adjoining Lush cosmetics, was originally used as an office by EBS before being sublet to the convenience store. Spar traded for about eight years and ended up paying an abated rent of €200,000. After merging with EBS to form one of the two pillar banks, AIB assumed responsibity for 115 Grafton Street and through agents Lisa McGrane of JLL has leased the premises to GlenAran at a rent of 310,000 per annum. The new tenant will trade out of 162sq m (1,746sq ft) on the ground floor and 91sq m (987sq ft) at mezzanine level. The basement area is to be used for storage.

GlenAran has its flagship store in Glengarriff, Co Cork, and also has outlets at Shannon Airport, Kinsale, Kenmare and Killarney. The company was represented on the Grafton Street letting by Stephen McCarthy of Savills.