Fresh property stimulus must heed lessons of past policies 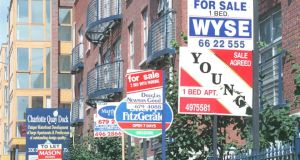 Some pretty stark facts emerged from the census survey of vacant homes in the Republic. One quarter of all apartments in the State were unoccupied on the night that it was taken. But even that figure, bad as it was, hid a much worse regional picture.

In the Border counties, 45 per cent of apartments were vacant – almost one in two – implying that if you lived in one in this region, those on either side were empty. In the west, 33 per cent were lying idle. In Dublin, where there was some demand for homes, the figure was 19 per cent. Outside the capital, at least one in three such dwellings were unused.

The picture could have improved slightly since then. In fact, a recent report on the property market by Goodbody chief economist Dermot O’Leary, which takes the census as its starting point, suggests that the overall vacancy rate could have fallen from 12 per cent to about 10 per cent. But those one- and two-beds in the west are probably still empty.

During the construction boom we built a lot of things that we did not need. About 480,000 new homes went up here between 2000 and 2006, five times the European average.

You could assume that this was all just the inevitable consequence of the frenzy around construction and property, but that it was not simply that. Government policy contributed directly. Publishing his report last week, O’Leary pointed out that much of the building in regions such as the west and Border counties was driven by tax incentives.

These were still available in 2006, even as the Central Bank issued a number of plaintive warnings that construction and property were accelerating at rates that were neither sustainable nor particularly good for longer-term economic health.

None of this will sound particularly new. But the problem is that for the past few months, there has been steady momentum growing behind the idea that the Government is going to try and provide some stimulus for construction when it publishes the budget next week.

Earlier this year, it emerged that it was considering providing €1 billion for capital spending that would directly benefit the sector.

More recently, Robert Watt, secretary general of the Department of Public Expenditure and Reform, said that there was a possibility that some of the proceeds from the sale of State assets could be used to fund some sort of stimulus in the form of infrastructure projects.

The tax breaks that added so much fuel to the fire in the last decade began life as a stimulus, to attract investment into the Republic’s declining inner cities or to spark development in specific industries. They were initially very successful, but successive Fianna Fáil-led governments continued extending them and only began winding them down in a meaningful way between 2006 and 2008, by which time the damage had been done.

While the current administration may not be looking at resurrecting tax breaks, it does appear to be considering some form of intervention. One of the reasons for doing this is the industry’s own state. It has been well and truly decimated. In 2007, it was worth €37 billion, last year that stood at €7.9 billion. It now accounts for about 6 per cent or 7 per cent of the economy, about half of what is considered to be the norm in most economies.

But this is not a good enough reason for giving it some sort of special treatment in a budget that is still going to see €2.5 billion taken out of the economy. There has to be something in it for the rest of us.

Whether it targets better infrastructure or affordable homes in places where they are needed, or both, any stimulus should have clearly defined goals. Most of all, it must avoid the mistakes of the past, which left us with buildings we don’t need and came close to burying the industry they were designed to support.