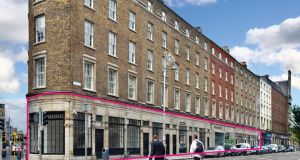 A German investment fund is in pole position to purchase the former headquarters of The Irish Times on Dublin’s D’Olier Street and Fleet Street for a figure close to €50 million.

The Irish Aviation Authority occupies the upper floor offices on a 10-year lease while three of the seven shops on the ground floor are also let. The overall rent roll of about €2.5 million will show a net initial yield of 5 per cent.

Renamed The Times building after the newspaper moved out in October 2006, the property was extended and restored by its new owner, the Cavan-based builder P Elliott, ending up with a floor area of 8,247sq m (90,707sq ft).

After the property crash the building was acquired by US investors Kennedy Wilson as part of a portfolio of loans associated with the P Elliott group.

The Irish Times was based in the Westmoreland Street/Fleet Street/D’Olier Street triangle from 1895 until the building was sold in 2006.