US vulture fund at centre of investigations over purchase of Nama’s NI assets for €1.6bn 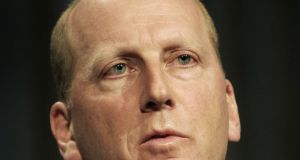 Cerberus’s purchase of Nama’s Northern Ireland assets for €1.6 billion is at the centre of investigations in the Republic, UK and US, following claims that businessmen and politicians were to benefit from the deal.

Accounts just published for two of its Irish companies, Promontoria Ram and Promontoria Finn, show that last year they paid just under €71,000 in tax on profits of €20 million earned on loans bought from Ulster Bank.

The $20 billion US fund uses more than a dozen companies in the Republic to hold loans and other assets bought at heavy discounts in Europe during the recession so it can take advantage of a tax break designed to attract financial services firms.

The incentive, section 110 of the Taxes Consolidation Act, 1997, allows it to write off the cost of borrowing to fund its purchases against its liability, reducing its tax bills in some cases to neglible amounts.

It also bought several large tranches of Irish property debts on which more than €20 billion was due in total, including Nama’s Northern Ireland loans, known as Project Eagle and Ulster Bank’s Project Aran, in 2014.

Its latest accounts show that it lost €6 million last year. However, that was largely due to a €10.4 million interest bill on a loan from its parent, another Cerberus company, Netherlands-based Promontoria Holding 60 BV.

Its Dutch parent gave it two loans totalling £130 million (€153 million) in 2013 to fund the purchase of the assets and charged high interest on both. The repayments on those debts and a larger liability of £215 million due to Nomura International, left it with very low tax bills.

Patrick O’Connell of RSM Ireland was recently appointed liquidator to Promontoria Thames. While Cerberus would not comment, it is likely that it is winding up the company as it has worked through the assets it bought and cleared the debts used to finance them.

Directors Jonathan Hanly and Karen McCrave recently filed a declaration showing that the company was solvent. It collected €23 million in repayments in 2015 on the loans it bought from the two British banks.

Companies Registration Office filings show that all of Cerberus’s Irish subsidiaries use the same structure. They are owned by Netherlands-registered entities, whose ultimate parent is the US fund, and which loan them large sums at high interest rates. Along with that, they also borrow from a third party, generally a multinational bank, and write off the repayments on all liabilities against tax.

The Finance Bill includes a change to section 110 that will prevent vulture funds writing off these costs against tax due on earnings from Irish property loans.