Former denim plant in Longford with extensive lands is guiding €800,000 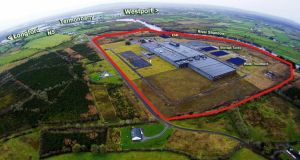 A former industrial building on extensive lands in Co Longford has been priced to sell by joint agents Lisney and William Harvey & Co.

Interested parties will be expected to tender by April 23rd.

The plant was set up for the production of denim in 1978 and was closed in 1999 by a subsidiary of the Dutch-based Royal Ten Cat.

The facility sits on the banks of the river Shannon and has its own water treatment system, open water storage tanks, sprinkler system and an electricity supply from three substations. Clondra is located about 8km west of Longford town on the Longford-Roscommon border. It is within easy reach of both the M6 and the M4 motorways.