Family says missing documents are key to their proceedings 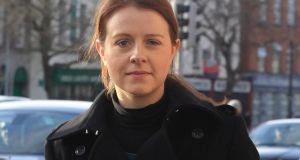 Aoife Quinn: formerly owned the Holiday Inn Hotel in Nottingham, control of which was seized by Anglo Irish Bnk in 2011. Collins Courts

Family members of businessman Seán Quinn have been told that the former Anglo Irish Bank has been unable to locate 135 original documents, including facility letters for loans of over €1 billion.

In a letter on October 30th to the Quinns, who are suing the bank which is now in liquidation over alleged illegal lending of over €2 billion, lawyers for the former bank McCann FitzGerald say they have “not yet located” 135 documents and that “efforts to locate the documents continue”.

Missing documents and copies of original documents are key to the family’s proceedings, as they claim that key documents were falsely described, backdated or were not shown to them in full before they borrowed vast sums from Anglo in order to illegally support the bank’s own share price.

Among the missing documents identified by McCann FitzGerald are facility letters and share pledges relating to the Holiday Inn Hotel in Nottingham, which was formerly owned by Aoife Quinn. The Quinns contend that the bank should not have been able to seize control of this hotel in 2011 if they did not have the original loan documents. Original documents relating to dozens of loans to various members of the Quinn family have also not been found.

The Quinns have also discovered a memorandum sent by Anglo to the Financial Regulator on February 25th, 2009, called “Information request relating to the Seán Quinn family loans and the unwinding of the CFD [contract for difference]”.

This states that Anglo sent the regulator 11 appendices along with its four-page memorandum setting out what went on. The Quinns want these appendices as they believe they will provide an almost real- time version of what occurred that was prepared without being given full legal consideration. The former Anglo says it cannot locate these.