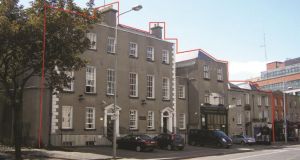 4 to 8 Charlemont Street: The row of buildings occupy a site of 0.29 of an acre and apart from the 40 metres of frontage to Charlemont Street, they back on to a lane leading on to Harcourt Road

Another stage in a long-term play for a substantial redevelopment site in the south inner city gets under way shortly when a buyer is sought for five adjoining houses fronting on to Charlemont Street in Dublin 2. The houses form a key part of an extensive urban block bounded by Charlemont Street, South Richmond Street, Harcourt Road and the Grand Canal which is set to be redeveloped over the next few years.

The overall site includes the former Charlemont Clinic, a private healthcare centre extending to 0.95 of an acre, which is currently for sale at around €5 million.

Agents Kelly Walsh are guiding €1.75 million for numbers 4 to 8 Charlemont Street, which are in relatively poor condition and though listed, could well be demolished.

The row of buildings – to be sold by tender on March 14th – occupy a site of 0.29 of an acre and apart from the 40 metres of frontage on to Charlemont Street, they back on to a lane leading directly on to Harcourt Road.

The same buildings were offered for sale in 2006 at €15 million but there were no takers. The current sale has been prompted by receiver Martin Ferris of Ferris & Associates

Around the same time property developer Conor Kenny of Clancourt paid €25.5 million for 0.6 of an acre in the same area assembled by businessman Ray Cairns.

Clancourt are the owners of the adjoining Harcourt Centre as well as another office complex at Park Place off Harcourt Street.

Another developer Sean Reilly of McGarrell Reilly is gearing up to build 260 apartments on the site for the city council.

Under a 10-year planning approval granted in 2010, the mixed-use regeneration project was to include a new public street from Charlemont Street towards South Richmond Street and the development of the apartments.

As well as a significant office element, the plan also provided for retail and restaurant use as well as a multiplex cinema and a community sports centre.

The overall scheme was to have a gross floor area of 53,275sq m (573,447sq ft). There have been a large number of office developments in the same area over the past 10 years, in part because of the arrival of the Luas transport service.

1 ‘My rent here is so low it’s a joke’
2 If tourists are such pariahs should we not be testing them on arrival?
3 WeWork on track for profits in 2021, says chairman
4 Varadkar and Donohoe to meet banks to discuss mortgage breaks
5 Goodbody’s planned €155m sale to Bank of China falls through
6 Importance of making a good first impression at interviews
7 How to . . . screen record on your phone or laptop
8 How to make better decisions in complex situations
9 Technology enabling firefighters to retrace steps in a crisis
10 Can Grafton Street stop the flood of closures?
Real news has value SUBSCRIBE