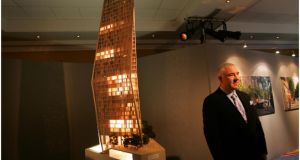 Five groups are believed to have made it through to the second round of bidding for Project Trinity, the prime property site in Ballsbridge acquired by Seán Dunne for development in the boom years, with offers ranging from €145 million to €155 million.

The groups are believed to be Cairn Homes, which recently floated on the London Stock Exchange; Colony Capital with Irish businessman Paddy McKillen; London and Regional, which previously owned the Four Seasons hotel in Dublin; and Chartered Land and Capstone, an American investment fund.

It is understood bidders had to offer a minimum €145 million to make the second phase of the bidding process. Twelve groups are thought to have submitted first-stage bids.

Having raised €400 million from its recent IPO, Cairn Homes would be in a strong position to finance a purchase of the 6.8 acre Ballsbridge site.

It recently acquired two sites of residential development land in Carrickmines, with a combined area of 9.1 acres, for €20.7 million and exchanged contracts for 8.11 acres of land at Marianella, in Rathgar, for €43 million, subject to approval by the Vatican and the Irish Charities Commission.

At the time of these deal announcements, Michael Stanley, Cairn Homes cofounder and chief executive, said: “We look forward to adding to our pipeline over the coming months, as part of our strategy to deliver high-quality homes, in major urban centres, with a particular focus on the greater Dublin area, where we believe the greatest demand exists.”

The sale is being handled by local estate agent Savills, Eastdil Secured in London, and Irish law firm Matheson.

There is a 10-year grant of planning permission to construct a 1.5 million sq ft urban quarter comprising 490 top-end apartments, a 152-bedroom hotel, and associated retail and commercial space, and community facilities. The permission expires in 2021, and the development will include 11 residential blocks.

The site houses the Ballsbridge and Clyde Court hotels, which are operated by listed Irish hotel group Dalata under short-term leases.