Entrepreneur aims to create up to 800 jobs in Navan 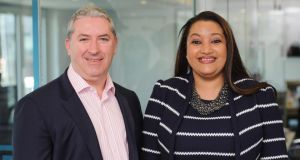 Noel and Valerie Moran are planning the development of a financial technology centre in Navan.

A UK-based Irish entrepreneur has ambitions to create up to 800 jobs in Navan, Co Meath, with the building of a financial technology centre.

The building, which is still in the design phase, is being developed by Noel Moran, the chief executive of Prepaid Financial Services, and his wife, Valerie.

Meath councillors have already approved in principle a land swap to facilitate the development in the centre of the town, which will involve the relocation of an existing carpark.

The project has been in the pipeline for the last two years during which time Mr Moran and his wife purchased the site and established an eComm Merchant Solutions branch in Navan which currently employs 72 people.

At present Noel and Valerie Moran run Prepaid Financial Services from its London headquarters. The firm is one of the largest MasterCard issuers in Europe and also one of the leading e-money payment companies.

However, Mr Moran, originally from Navan, is said to be eager to return to his roots and recently bought the Bective House estate in Co Meath.

“It will change the face of Navan and transform it into Ireland’s leading regional financial services centre,” he said. “We look forward to working with Noel and his team to help turn his ambitious and exciting plans into reality.”