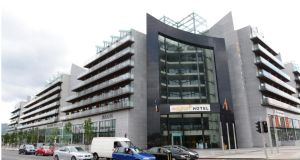 Three successful retail parks in Tallaght, Dublin 24, Naas, Co Kildare, and Limerick city are to offered for sale at an overall valuation of €77 million as part of a renewed campaign by Danske Bank to recover distressed assets from the sale of of properties over the coming months.

The bank has clearly signalled its belief that with so many overseas and Irish buyers now chasing high-yielding properties it expects to achieve a higher capital recovery though direct sales of assets rather than bulk selling of impaired loans.

Fintan Tierney of DTZ Sherry FitzGerald is handling the sale of up to a dozen property investments for the bank which, according to one report, had advanced loans of €1.8 billion to the commercial property sector when the market collapsed.

The carrying value is shown at €710 million with the balance – €820 million – reflecting impairments already taken by the bank. Danske’s exposure to the Irish property market stemmed from aggressive marketing and excessive funding by its subsidiary, National Irish Bank.

Private investors will be particularly interested in the forthcoming sale of a highly successful serviced office centre overlooking the Grand Canal at Leeson Street Bridge in Dublin 2 which has a guide price of €10 million. The modern Georgian-style building at 25-26 Fitzwilliam Place has 60 office workplaces and is producing a rent roll of €800,000.

The business and a similar operation in Belfast have been operated for many years by property developer Michael Kelly who took a severe hit a year ago when he sold Dublin’s former Hume Street Hospital off St Stephen’s Green for about €3 million – a long way from the €30 million paid for it six years earlier.

The 90 per cent fall in the value of six 250-year-old Georgian houses at the front of the hospital was due not only to the property crash but also to the fact that severe water damages was caused after thieves stripped the roof of much of its protective lead flashing.

Busy junction
DTZ has put a €7 million valuation on Mr Kelly’s business and retail complex at 41 Arthur Street/20 Callender Street, Belfast, which are producing rents of €700,000 per annum.

The highest value segment of the Danske Bank portfolio going for sale is the €40 million-plus expected for the Arena Centre in Tallaght which is jointly owned by Cavan developer P Elliott and the Kildare-based Queally Group, one of Ireland’s largest and most successful privately owned agri-businesses. The two partners also control the Globe retail park in Naas which is expected to make about €15 million when it is sold by private treaty.

The Arena is producing €4 million in rents from a range of retail, office and residential tenants. The 27,870sq m (300,000sq ft) complex was developed in 2007 at the busy junction of Whitestown Way and the Tallaght bypass (N81) close to Tallaght town centre. The extensive building also includes a basement car park and the 119-bedroom Maldron Hotel, which is paying a rent of €200,000 per annum.

The third retail park going for sale, Parkway Valley in Limerick, was built by Liam Carroll’s Danninger Group as part of a larger shopping complex which remains uncompleted. Earlier this year, a Northern Ireland based developer, Indian-born Suneil Sharma, was reported to have acquired development rights for the shopping centre from Danske Bank which is understood to have pumped €60 million into the site.

Development land
Another former Liam Carroll-owned property, Horizon Park at the rear of Dublin airport in Harristown, is expected to fetch about €25 million when it is sold along with a further 18 acres of development land. The sale includes three large warehouses rented by international transportation companies Kuehne & Nagle, Ceva and Kintetsu at about €1 million per annum.

Also going for sale at €7 million is a car park at the Parnell Centre in Parnell Street in Dublin 1. It had been rented at €500,000 under a lease which is due to be renewed.

DTZ is also due to seek buyers for two retail units occupied by Starbucks and Londis at College Green, Dublin 2, which were acquired some years ago by developer John Ronan of Treasury Holdings. €3 million is being sought for the Londis store which is rented at €167,000 per annum. Starbucks is paying a rent of €185,000 for the a adjoining outlet which has been valued at €2.5 million.