Talos concern at losing out on €2.78m judgment against Blackrock Clinic shareholder 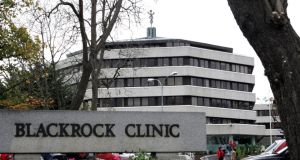 A company that obtained a €2.8 million judgment against Joseph Sheehan and John Flynn, two of the main shareholders in Dublin’s Blackrock Clinic, has secured interim charging orders over Mr Sheehan’s shares in a firm that owns a half share of the private Galway Clinic.

Mr Justice Brian McGovern granted the interim orders on the ex parte application (one side only represented) by Bernard Dunleavy SC, for Talos Capital Ltd, at the Commercial Court.

The matter will return before the court next week when Mr Sheehan will have an opportunity to challenge the orders.

Talos sought summary judgment over alleged “material” default on a loan agreement under which it advanced €2.4 million for a proposed transaction, which ultimately did not proceed, under which the defendants were to acquire their loans relating to the Blackrock Clinic and the associated security from Irish Bank Resolution Corporation.

The defendants disputed Talos’ claims but Mr Justice Ryan ruled Talos was entitled to summary judgment for €2.78 million, plus costs, with execution of the judgment order to be stayed for six months.

In seeking the charging orders, Gavin Simons, solicitor for Talos, said in an affidavit that no payments have been received from the defendants on foot of the judgment.

He said Mr Sheehan is a director of Blackrock Medical Partners, with registered offices at Clare Street, Dublin, and is the legal and beneficial owner of 45 shares in that company, representing 50 per cent of its entire shares.

Mr Sheehan had on January 12th last presented a petition to have that company wound up and to have a liquidator appointed, he said.

It had been reported in the media that Mr Sheehan had presented the petition as he wanted to separate his interest in the hospital from that of his brother Jimmy, which would give him control of his shares and allow him use them as security for borrowings, Mr Simons said.

If that media report was correct, Talos would be prejudiced as a judgment creditor of Mr Sheehan’s, Mr Simons said.

Given the substantial monies owed to Talos, it wanted to charge the shares held by Mr Sheehan in Blackrock Medical Partners with payment of the judgment, the solicitor said.

In the context of the stay relating to the €2.8 million judgment, Talos did not intend to take any steps to levy execution of the charging order for the six month period of the stay but was concerned in the meantime not to lose its priority as against any other creditors of Mr Sheehan, he added.