Company has failed to back up ‘deceit’ claims over pyrite, court told 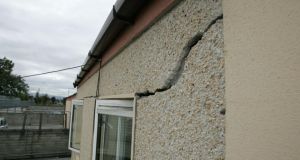 Cracking in a house caused by the use of pyrite. Photograph: Frank Miller

A building company has failed to back up its “most serious” claims of deceit in relation to being supplied with allegedly defective infill product containing excessive pyrite, the High Court has been told.

Irish Asphalt Limited, Lagan Holdings Ltd and three Lagan directors, contend adequate particulars of the claims of deceit made against them by James Elliott Construction Ltd (JEC) have not been provided. They want orders compelling those to be provided or, failing that, for the claims to be struck out.

JEC denies it has failed to provide adequate detail and is opposing the defendants’ pre-trial applications which opened yesterday before Ms Justice Caroline Costello.

James Elliott Construction has sued Irish Asphalt for loss and damage over allegedly deceitfully putting on the market an infill product “not fit for purpose” and containing excessive amounts of reactive pyrite.

It claims Irish Asphalt misrepresented the quality of the product it sold and either knew, or was reckless, whether its representation of the product was true or false.

The Elliott company is basing its claim on material that emerged from other legal proceedings relating to the use of infill. The cost of the product supplied by Irish Asphalt was €525,582 but the potential value of legal claims against it is “many multiples” of that, it claims.

Lyndon MacCann SC, for the Lagan defendants, said Elliott had made a series of vague allegations and failed to clarify how his clients had allegedly procured Irish Asphalt to supply the pyrite.