Castlemartyr hotel and golf resort on the market for €13m 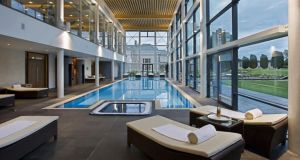 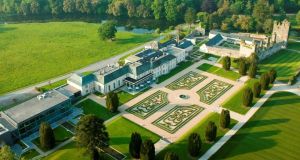 Castlemartyr in Co Cork: one of Ireland’s most spectacular hotel resorts

One of Ireland’s most spectacular hotel resorts, Castlemartyr in Co Cork, goes on sale on the international market from today with a guide price of €13 million. It is most likely to be bought by an overseas company, though a number of Irish hotel groups are also thought to be interested.

Apart from Dromoland Castle, which continues to trade successfully, the five-star east Cork resort is the last remaining jewel in the crown of the Irish tourism industry to be going up for sale as a result of the economic crash.

Parknasilla Resort and Spa in Sneem, Co Kerry, was the first of the major provincial tourism hotels to have been sold. It was bought by a Swiss Lebanese businessman towards the end of 2012 for €10 million – a fraction of its original cost of €40 million plus €10 million spent on refurbishment.

Ashford Castle, another stunning five-star property in Cong, Co Mayo, was sold to a South African hotelier in June 2013 for €20 million and has since undergone a €47 million refurbishment.

Although Castlemartyr opened for business only in 2007, it has already attracted considerable international attention partially because of an enthusiastic response from a number of international guests including Bruce Springsteen, Bill Clinton and, more recently, by Kanye West and Kim Kardashian. Tom Barrett of Savills describes Castlemartyr as “arguably one of the finest hotels ever to come on the market in Ireland”.

The property is certainly impressive by any standards. A 17th century manor house reflects the superb qualities of the period – grace, elegance and space – and it also has a contemporary wing built in 2007 and housing 92 new rooms.

The ruins of an 800-year-old castle in the background add charm and character to the 220 acre estate featuring mature parklands, a lake and the obligatory 18-hole golf course. All this is within 20 minutes’ drive of Cork city.

The hotel has 103 bedrooms in all, including 32 suites and manor state rooms. The sale also includes 19 golf lodges and one mews house.

Castlemartyr is also well known for its fine dining. It has two restaurants, the Bell Tower and Franchini’s Italian restaurant, as well as an impressive bar and garden room.

One of the great attractions of Castlemartyr, however, is wellness spa and fitness centre. The wraparound glass frontage surrounding the 20-metre swimming pool and water room creates a peaceful environment.

The guests also have complementary use of the gym and fitness studio fitted out with the latest equipment.

The resort has been steadily building up its wedding business over recent months and it can seat 220 guests.

Summer season rates start at €190 based on one night stay with full Irish breakfast and a two-course dinner for two on one evening in the Bell Tower restaurant.