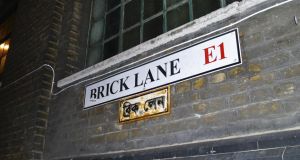 As many as 2,000 homes, office buildings, stores and leisure facilities may be developed on the site near Brick Lane and Shoreditch. Photograph: BJ Scantlebury

Ballymore’s debts are held by the National Asset Management Agency and it is headed by Seán Mulryan. Together with Hammerson it is working on a 280,000sq m development proposal for the Bishopsgate Goods Yard, according to a filing to Companies House in December.

The companies together bought an option to acquire the site in 2002. “Where can you find 10 acres of vacant land, a stone’s throw from the City of London, at the heart of the emerging tech belt and with Brick Lane and Shoreditch on your high street?” chief executive officer David Atkins said in an interview earlier this month.

As many as 2,000 homes, office buildings, stores and leisure facilities may be developed on the site, the boroughs of Tower Hamlets and Hackney said in a 2010 document.

Residential property values in the City of London and its fringes rose 14 percent in the year through July, double the average growth rate in the best parts of central London, according to Knight Frank LLP.