Attracting a new generation to the Dublin Docklands

It is already a thriving centre for commerce and urban life, but potential remains untapped 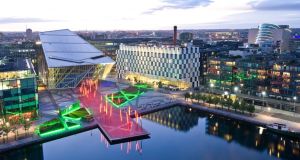 The Dublin Docklands, which has a richly multicultural, and very young, population. Dublin City Council has said the ambition is for the area to become one of the great urban living environments of Europe

The hugely successful regeneration of Dublin Docklands, which began 28 years ago, has been one of the most important factors in raising the profile of Ireland internationally and in attracting the world’s top companies to Dublin.

It has boosted technology, amenities, tourism, education, transport, business and retail activity, and employment. Some 40,000 people work in the area and there are 14,000 households there.

There is a rich multicultural mix in the Dublin Docklands, with 55 per cent of the population born in Ireland, 20 per cent in other European countries and 16 per cent from the rest of the world.

The unemployment rate is just 5 per cent, half of that in the city as a whole. Professional workers make up the largest occupational group, at 31 per cent, followed by associate professional and technical workers, at 21 per cent, administrative workers, at 11 per cent, and managers and directors, at 9 per cent.

The 2011 Census recorded 2,759 housing units within the SDZ boundary. Of the total households recorded, 93 per cent live in apartments, compared to a rate of 33 per cent throughout the city. Of these, 62 per cent are in private rented accommodation, 24 per cent are owner occupied and 11 per cent are rented from the local authority or a voluntary body.

In the city overall, owner occupiers account for 52 per cent, with private rentals at 32 per cent and homes rented from local authorities or voluntary bodies, 13 per cent.

The clustering of this activity is of increasing importance to the Dublin region and to the national economy. It also has a significant impact in a competitive global context.

There are also a number of strategic spatial dimensions: the building of an addition to the expanded inner city and the reconnection of the capital with the sea and the bay.

In tandem with livelihood and jobs, there is a need to focus on quality of life which can best find expression in a new urban quarter and attractive neighbourhood, according to the council’s Draft Planning Scheme 2013.

There is a great opportunity now to work on what has been achieved to date in the Dublin Docklands, and to provide high quality residential and commercial developments which will ease the current shortage of homes and offices.

Dublin City Council has said the ambition is for the area to become one of the great urban living environments of Europe, providing a unique and enriching life choice and experience for residents. The regeneration policies of the past two and a half decades have delivered high quality housing for contemporary urban living in the area. This attracts a variety of residents and family types, providing opportunities to live in a safe people-friendly environment.

The council’s proposal for the next phase in the evolution of the Docklands is to encourage innovative designs for, and successful models of, multiple-unit developments. The aim is to create housing that attracts a new population, while allowing existing residents more choice within the locality.

Nama has said it intends to play a key role in this next phase, and it is in a position to do so as it holds security over 75 per cent of the undeveloped sites in the SDZ area.

The SDZ for North Lotts and Grand Canal Dock areas was approved in April 2014 by An Bord Pleanála. There are a number of ways Nama can participate in the development including sale of sites, joint ventures with developers or direct construction through contractors.

The approval of the SDZ allows for 2,600 apartments and 366,000sq m of office space to be developed across 22 hectares. A number of undeveloped sites have existing section 25 certificates for development, but if they are not substantially built in 2014 they may lose their permissions under planned legislation.

Some feel they lack flexibility in providing for the office requirements of incoming multinational companies; others are disappointed that there is a continuation of the policy of low-rise buildings in the Docklands in all but two locations.

The reality is that the framework is now largely in place to advance a number of key projects in the area. However, a robust programme of apartment construction is being impeded by extra costs caused by excessive planning regulations.

Dublin Docklands has grown steadily in importance on a national and international scale. It is a thriving, vibrant location. The next phase in its development should be every bit as exciting and successful as the first phase. It presents a superb opportunity for all concerned to ensure that this occurs.

David Cantwell is a director of Hooke and MacDonald, who pioneered the development and sale of apartments in Dublin from the 1970s, promoting ‘City Living’ as a solution to some of the city’s housing problems, with particular emphasis on the rejuvenation of the heart of the city including Dublin Docklands.

1 Aldi to impose limits as Christmas toys go on sale
2 Fair deal? Family at odds with hospital and each other not so sure
3 ‘Essential’ retailers risk a firestorm if they exploit the closure of the ‘non-essential’
4 ‘I hate haggling because I hate when people do it to me’
5 Ryanair and Eir the worst for customer service during Covid crisis
6 Dresses and monogram bags boost Louis Vuitton sales
7 What to consider if older person or loved one needs care at home
8 AIB settled Citigroup dispute over Rusnak at fraction of $872m claim
9 €8m for Dublin city centre site with scope for 124 apartments
10 Coronavirus: How Covid-19 may reshape the Irish retail landscape
Real news has value SUBSCRIBE