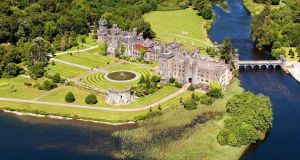 Ashford Castle hotel resort which has been sold for €20 million.

Red Carnation Hotels, owner of 14 boutique hotels, plans to carry out a major refurbishment of the five-star hotel in Cong, Co Mayo, which was placed in receivership 18 months ago by its owner, the Galway businessman Gerry Barrett.

He bought the castle and its 365 acres overlooking Lough Corrib from a group of Irish-American investors in 2008 for €50 million.

Mr Barrett’s company, Edward Holdings, continues to run the G Hotel and the Meyrick Hotel (formerly the Great Southern Hotel) in Galway and the D Hotel in Drogheda.

Tom Barrett of estate agents Savills, who handled the sale for receivers Ernst & Young, said yesterday that Ashford Castle was continuing to trade successfully after making profits of over €1.5 million last year.

Joint receiver and manager Luke Charleton of Ernst & Young said the deal secures the 160 jobs at the resort.

The hotel’s 83 bedrooms and six suites attract some of the highest rates in the country, ranging from €415 to €950 for a double room per night in peak season.

A large proportion of its business comes from the United States and Continental Europe.

Last year the hotel was voted the best resort in Ireland and third best in Europe in Condé Nast Traveller .

Red Carnation Hotels was founded by a wealthy South African-born hotelier Mrs Beatrice Tollman, who visited Ashford Castle in April. Her other hotels include The Milestone near Kensington Palace in London, Hotel d’Angleterre in Geneva and The Twelve Apostles in Cape Town.

Ashford Castle was first advertised for sale on the international market in October last and attracted over 200 inquiries from the hotel industry.


It is not known whether the new owners will proceed with a master plan which envisages the development of 13 further penthouse bedrooms, 30 residential lodges and the upgrading of the nine-hole golf course to an 18-hole venue.

The castle was founded almost 800 years ago and was extended over the years by a range of owners including the Guinness family.